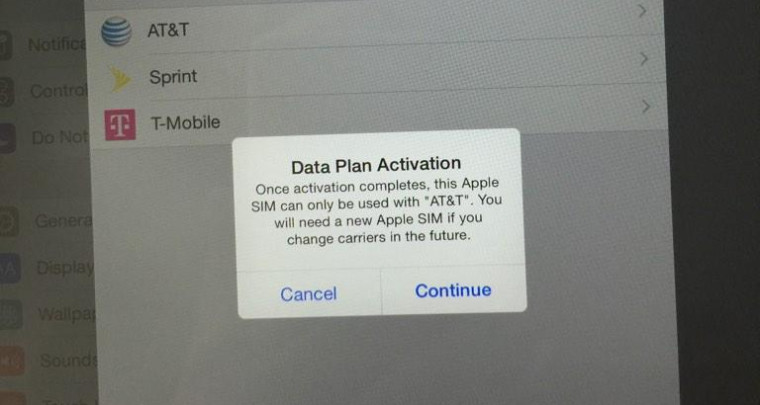 The Apple SIM concept wasn't exactly revolutionary, but it was a pretty great introduction of the technology. The concept is fairly simple: there are a lot of different carriers out there, and rather than buying a SIM card locked down to a specific carrier, you should be able to change your carrier and retain your SIM card. Great right?

Unfortunately, it seems that AT&T was unhappy with this level of freedom. The CEO of T-Mobile, John Legere, posted a series of photos on Twitter showing that once a user selects AT&T as their carrier, they can never change it to something else. This effectively turns the Apple SIM into an AT&T SIM card, and ruining a fairly interesting element of Apple SIM.

On Ipad with@apple sim here is what u see..no @Verizon ,@ATT trying to lock u, @sprint with error page! @TMobile wins pic.twitter.com/z0jDZ9sRt5

The device itself isn't locked-- you can get a new Apple or carrier SIM and keep using it as you normally would, but the SIM card itself is locked at that point.

It's a fairly unsurprising move from AT&T, but it's still disappointing. Apple largely doesn't care about this, as the point of Apple SIM-- to them-- was to allow the user to buy an iDevice directly from Apple without having to worry about which carrier they're going to choose afterwards.