Microsoft CEO, Steve Ballmer, is known for pulling some pretty interesting stunts and making direct comments putting down competitors of Microsoft. For example his comment back in July stating that Apple's Mac growth is a "rounding error". The war between the two companies have been going on for years now, and yesterday Ballmer pulled yet another stunt at a private company meeting at Seattle's Safeco Field.

According to Todd Bishop over at TechFlash, Ballmer was taking the stage for the event and "he spotted someone at field level, allegedly a member of the Windows group, using an iPhone to take his picture. Ballmer grabbed the Apple device from the employee and made some funny remarks as everyone booed. Then he put it on the ground and pretended to stomp on it, before walking away."

After Ballmer was finished up his stunt, important details were announced at the event. Bing 2.0 was the main highlight of the meeting, and according to some tweets from employees of Microsoft, it will be powered by Silverlight.

Update: Engadget claim to have the picture taken from the iPhone above Ballmer's head: 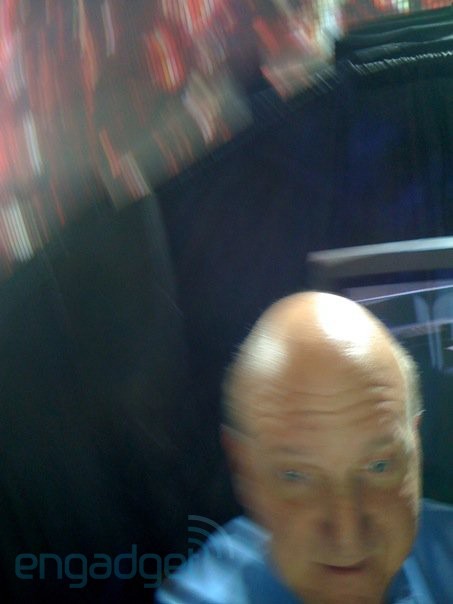