It's been almost two years since the BBC Sport app was first launched on iOS, with Android users getting their hands on the app a few weeks later. 22 months on, the BBC has today announced that the app is now available on Windows Phone 8 and 8.1.

The Beeb says that it has seen "a significant increase in Windows Phone usage" of its digital services over the last year, with over 800,000 users accessing the BBC Sport mobile site in November alone. This increased usage prompted the BBC to develop an app for Microsoft's mobile OS, and its release is said to be the product of several months of work for the BBC's development team.

The BBC lists the app's features as including: 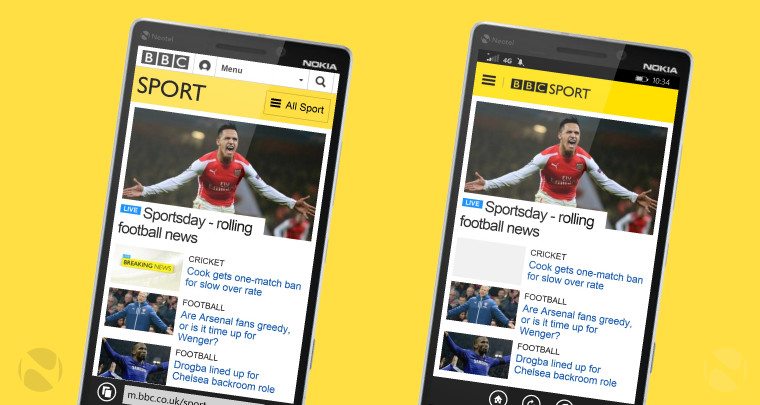 The Windows Phone app does offer Live Tile support though, with the latest sports headlines being shown on the tile, along with the ability to easily share content.

But it lacks other, richer features available in the same app on other platforms. Start up the BBC Sport app on Android for the first time, and you'll get a walkthrough of features, including the ability to get live push alerts for Formula 1 races, for example. No such feature exists on the Windows Phone version, and the app doesn't even support video content yet.

Unfortunately, the only way things will improve is if Windows Phone usage continues to rise in the UK. Ryan Thomas Hewitt - Senior Business Analyst for BBC Sport - said: "We will monitor app usage [and] user feedback, alongside other operating systems, and use this to make decisions about additional functionality for the Windows Phone app. As a publicly funded organisation, the BBC needs to factor in how large an audience can be reached with a particular app."

Still, even a limited app is better than nothing, so head over to the Windows Phone Store to download the app now, and let us know your thoughts in the comments below.