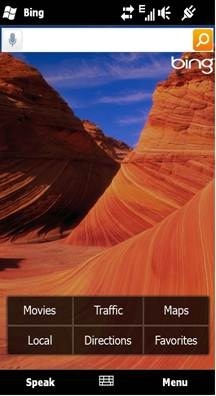 Bing has released a big update for Windows 6.x phones, adding a new home page, Movies and Traffic.  The new app changes gives users faster access to common search, including the navigation of the app, allowing for easier access to the new and existing features.

In addition to the new UI and Movies, the Bing app can now be used as a turn-by-turn navigation, powered by Bing Maps.  Only a short list of Windows 6.x phones are supported, but those phones that are supported offers users a free GPS.

Sprint, T-Mobile and AT&T customers can take advantage of the voice turn-by-turn navigation, which gives the app a lifelike experience.  The Bing app will also give you navigation directions, allowing users to select the fastest or shortest route to your destination.  The app also includes an option to avoid traffic and/or tolls, when planning your route.

This is the list of supported Windows 6.x phones:

MobileTechWorldTV demonstrated in this YouTube video how the updated Bing app works: