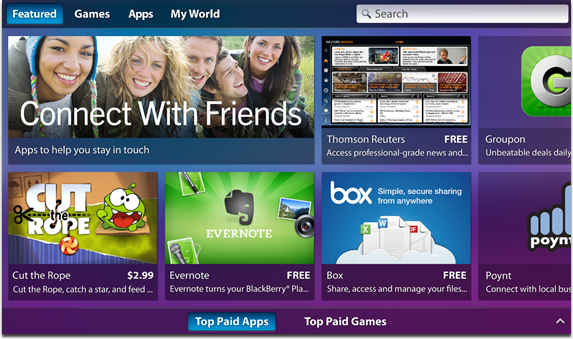 It's taken a long while but today, owners of the Blackberry Playbook tablet now have a major new operating system update to play with. Research in Motion announce today that the 2.0 version of the Playbook tablet is now available for automatic download. The update was originally scheduled for launch by the end of 2011 but RIM decided to delay its launch until this month.

One of the biggest new features, and one which really should have been included in the Playbook since it was first released in April 2011, is a dedicated email client. Playbook users can now check out all of their emails via one program, including Facebook and Twitter messages. The 2.0 update also offers up new Calendar and Contact apps.

If you also own a Blackberry-based smartphone, the Playbook 2.0 upgrade offers up a new app called Blackberry Bridge that will allow users to view Blackberry phone apps on the larger seven inch tablet screen via a Bluetooth connection. There's also some new document editing features, an improved virtual keyboard and thousands of new apps to download via Blackberry World, including a number of Android apps that have been ported to work with the Playbook OS.

While the 2.0 update will certainly be a welcome one for current Playbook owners, it's questionable whether or not it will boost new sales of the tablet. RIM has already been trying to unload its current inventory via price cuts but so far they don't seem to be making much headway.