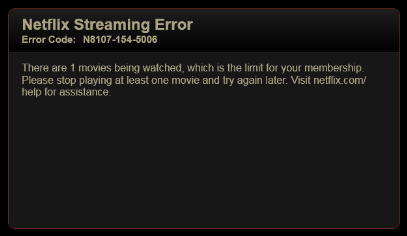 Netflix's streaming video service allows its users to access its library of movies and TV episodes from a ton of different devices; from PCs, Macs, four game consoles, a number of set top boxes and WiFi-based televisions. But it's a known fact that Netflix subscribers like to share their accounts with family members and friends. As a result, sometimes one family member may be streaming a movie in their bedroom while another, using the same Netflix account, could stream a different movie in their living room.

Netflix's Terms of Service have technically banned this kind of situation, stating, "If you are on the 1 disc out at-a-time plan [or stream-only plan], you may watch only one device at a time." Earlier this weekend, as the Stop the Cap web site states, it seemed like Netflix was starting to enforce this part of its TOS with reports that Netflix subscribers on the stream only plan can no longer stream more than one video at a time.

Officially, Netflix does allow up to four streaming videos to run from one account at a time but the catch is that you have to subscribe to Netflix's more expensive plans. The Terms of Service note says, "If you are on the 2 discs out at-a-time plan, you may watch on up to two devices at the same time. Members on the 3 disc plan can watch on up to three devices. The maximum is four devices simultaneously, and that is available for members on the 4 or greater discs out at-a-time plans."

After the first report on the streaming video restrictions got out onto the Internet this weekend, Steve Swasey, Netflix's vice president of corporate communications, posted a comment to the Stop the Cap story saying, "Folks, we’ve sent a message in error to a few people about this so here’s the clarification: No Netflix member is limited to less than two concurrent streams. A few Netflix members have heard differently from us, which is an error that we’re fixing." Later in the day, the "error" seemed to have indeed been fixed with Netflix customers with the streaming only plan now reporting they can go back to watching two videos at once from the service. However the Terms of Service on the site still reflects the "one video streaming at a time" rule as of this writing. There's no word as to why Netflix is contradicting itself with this kind of activity.

Image via Stop the Cap