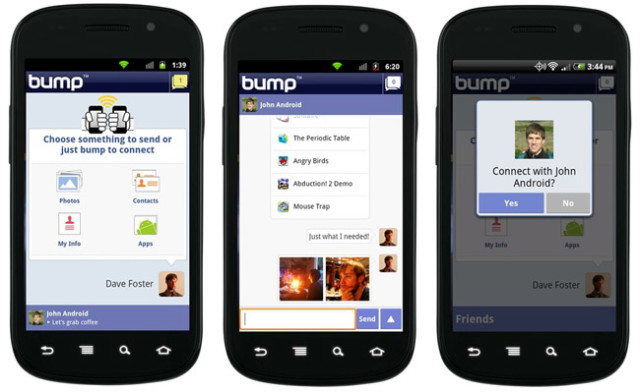 Popular mobile applications for media sharing, Bump and Flock, will be removed from the iTunes App Store and Google Play Store following the acquisition of the development studio by Google in September.

David Lieb, CEO and co-founder of Bump, has announced in a blog post called "All good things.." that the company will be focusing on Google's projects going further and will be discontinuing their existing apps Bump and Flock from the respective app stores for iPhone and Android. Google acquired Bump in September for an undisclosed sum but never promised that the service would be continued post-acquisition.

The removal of apps is slated for January 31st and users are advised to fetch their data before that date as the apps will stop working and user data will be erased from their servers. To get the data, users should open either app and follow the instructions after which an email with a link containing the data from Bump or Flock will be sent.

Prior to the acquisition of Bump, Google acquired Waze in June 2013 which is another popular app on Android and iOS, but unlike Bump it has continued to actively develop the app. Windows Phone version of Waze was released post-acquisition in November.