Students in grades K-12 are becoming more and more computer savvy as schools open their budgets for computer purchases. And while Chrome OS has tended to be the operating system of choice by a sizeable margin, Windows is making some headway.

According to a new report from FutureSource Consulting, mobile PC sales in schools are starting to slow within the United States. There is expected to be only a 9% increase in 2017, down from 19% in 2016. That doesn't mean that schools are not paying as much for computers, but that market penetration is already at close to 50%, which leads other international markets.

Of those having computers, 59.8 percent of mobile units shipped to schools were running Chrome OS by the end of Q3 2017, up from 57.7% in 2016. Windows was only being used on 22.3% of machines (up only 0.1% from 2016), while iOS was only on 12.3% of machines, down from 14.3% in 2016. Note that the report only covers notebooks, Chromebooks and tablets, and does not include desktop PCs, and reflects purchases by schools or school districts and not by individuals bringing their own machines.

Worldwide, however, tells a much different story. It is Windows that is stomping the competition with a 66.5% of classrooms using it on mobile devices as of Q3 this year. Chrome OS is only on 7.7% of devices, and iOS on 6.1%. Android devices actually make a better showing worldwide, with a 14.4% adoption rate on shipped units. 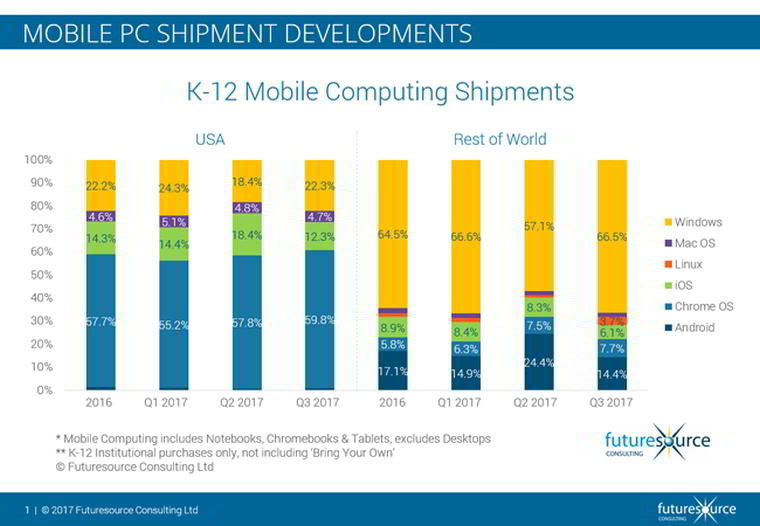 The FutureSource report did point out that machines currently in use are approaching replacement time, with both Apple and Microsoft making significant headway in initiatives for students:

Microsoft and Apple have made major education focused investments in the past couple of years. Microsoft has developed its solutions ecosystem, including the launch of Microsoft Teams for collaboration, InTune for device management, Windows 10S and a number of new licensing packages. In addition, a large number of education specific, sub $300 Windows based devices have entered the market and are having an impact. Apple meanwhile has introduced the Classroom app, Swift Playgrounds coding solution and major education focused functionality updates to iOS, including the ability to share iPads and improved device management solutions.

The report pointed out that the launch of a lower cost iPad in Q2 was a huge boost for the iOS, helping slow Chromebook growth in Q3 to its lowest point so far. Windows units also gained momentum in Q3, which shows that Chrome OS could lose a significant chunk of users when schools choose to replace their older units.

The Windows blog chose to focus on the positive:

Of course, it could have also focused on the worldwide numbers, with Microsoft holding a huge lead in both developed and emerging markets. As a matter of fact, Windows is continuing to extend its lead over Android in emerging markets, although Chromebooks have been increasing in popularity in Northern Europe.