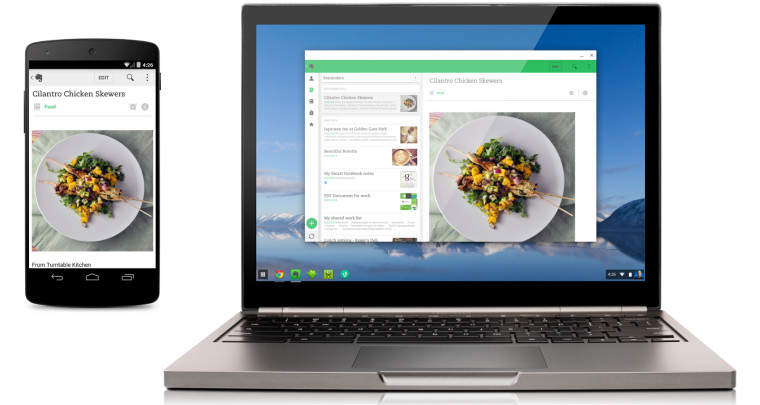 In the above image, the Evernote app is shown on both Android and Chrome OS

Although Google had announced last year that there were no plans to merge Chrome OS and Android into a unified operating system, nothing was really made clear regarding cross-compatibility of apps between the two platforms. Earlier this year at Google I/O, buried between the announcements of Android L and Android Gear, Google demonstrated the beta 'App Runtime' project. 'App Runtime' is a middleman that allowed Google to demo the Android versions of Evernote, Vine and Flipboard on Chrome OS.

Moving forward to the present, Google has officially released the first set of Android apps that can run on Chrome OS, including Duolingo, Evernote, Sight Words and Vine. All of these can be downloaded from the Chrome Web Store.

In a blog post announcing the release of the aforementioned apps, Google mentioned that they will be "working with a select group of Android developers" to bring more of the popular apps to Chrome OS, with emphasis on producing a seamless experience between the two platforms.

Encouraging user participation in the process, Google has also set up a Google Forms page to get feedback on which apps users would like to see ported to Chrome OS. The form requests that users link to the Android app's Play Store URL, specifying whether or not they are the developer, and provide the developer's email address.

It will be interesting to see the developments in Google's Android API that will enable this seamless transition between the two platforms.

Below is a video of Google demonstrating 'App Runtime' back at Google I/O earlier this year (the demonstration starts at 1:41:10):