Hatred is an isometric shooting game where you play the role of a cold blooded antagonist, a sociopath full of hatred for humanity. Announced in October, the game features a dark and discomforting theme and according to the developer Destructive Creations, your main job in the game is to:

Wander the outskirts of New York State, seek for victims on seven free-roam levels. Fight against law enforcement and take a journey into the antagonist's hateful mind. Gather equipment of the dead ‘human shields’ to spread Armageddon upon society. Destroy everything on your way of hunt and fight back when it's disturbed...

The game made its way to Steam Greenlight, but was quickly removed by Valve. Why? Valve's Doug Lombardi explains:

Valve's decision was quite surprising considering that in 'a couple of hours', the game had become the 7th most wanted game on Steam Greenlight attracting 13,148 up votes. Only 7% of the community had voted against the game's release.

The developer quickly issued a statement on the game's website stating that the studio 'fully respects Valve's decision' while also questioning the company's reasoning behind releasing games like Manhunt and Postal:

Even though games like Manhunt or Postal are still available on Steam we of course fully respect Valve’s decision, as they have right to do so. In the same time we want to assure you that this won’t in any way impact the game development, game’s vision or gameplay features we’re aiming for. The game is still to be released in Q2 2015 as planned.

Moreover we don’t treat this as a failure because yet again this showed us a huge community support we’re totally overwhelmed with.

[...] The whole situation only pushes us forward to go against any adversity and not to give up. It also makes us want to provide our fans Hatred pre-orders sooner, as many of you have asked for them. 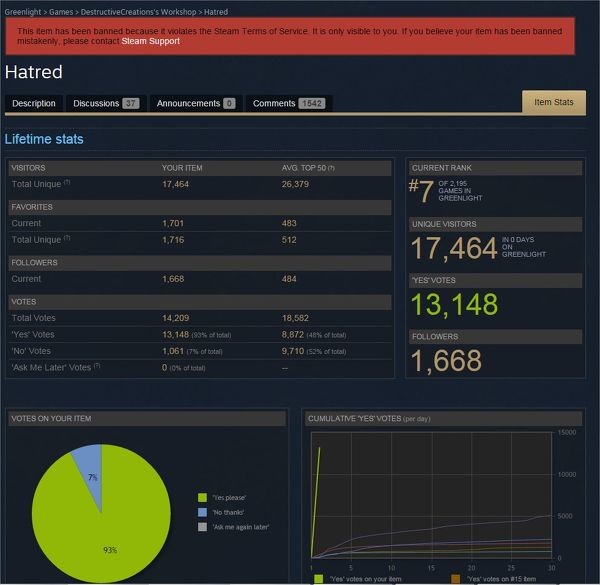 As can be seen from the developer's official statement, the game is still slated for a release in Q2 2015, but will have to be published on some other digital distribution service considering Valve's refusal to release the game on Steam.

This isn't the first time a game has received criticism for mindless violence with GTA V being a prime example. However, considering that games are a form of art and entertainment just like movies and books they have a right to free speech. If needed, there is a ratings system in place for games to be limited to a specified audience.

That being said this is a delicate but important subject, which warrants further thoughtful discussion among gaming communities, creators and distributors alike.