If that’s too rich for your blood, but you want to get into the 3D printing game, then Kickstarter might be an option for you. WobbleWorks has come up with a unique idea for a pen-like device that, instead of being limited to paper, can draw in three dimensions. Do you want to draw a stick figure? Go ahead. A 3D house? No problem. The Eiffel Tower? There’s a stencil for that! We suggest that you watch the above video as it will wow you more than we can explain in an article. 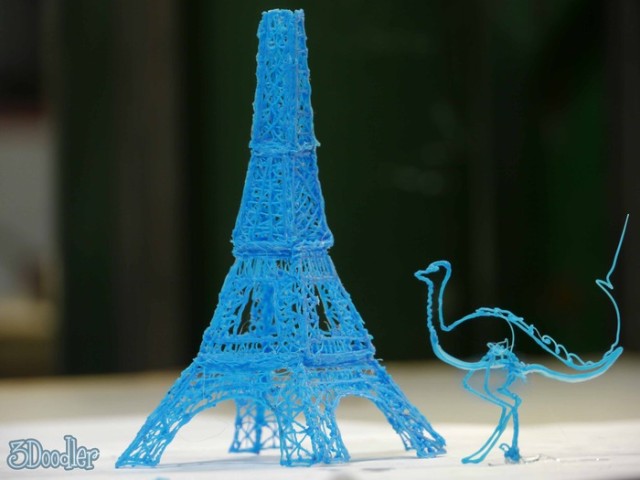 The gadget, called the 3Doodler, looks like a huge success. Max and Pete, the duo who make up WobbleWorks, created the project last night with a modest goal of $30,000 in 34 days. When we first saw the project early this afternoon, it was already funded at over $100,000. When we checked back after dinner, the funding had ballooned to over $309,000! The low price points (you can pledge $75 for your very own 3Doodler pen), combined with the “wow” factor of the video have obviously inspired over 3,500 people to pledge to the project.

While it appears that the 3Doodler already has a working prototype, we want to remind everyone that there’s always a risk when donating to a Kickstarter project. Although most projects we’ve seen have been successful, some never materialize leaving backers financially out in the cold. That said, let us know what you think of this new spin on 3D printing; we’re looking forward to receiving our own and will write a review when we get it!