Microsoft unveiled its digital assistant, Cortana, back in April 2014, and has gradually expanded its capabilities since then. In the last few months alone, Cortana has gained the ability to manage to-do lists and assist with Xbox interactions, and it will soon be able to surface on Android lock screens, and help with scheduling meetings. With the new Skills Kit SDK - for which registrations opened this week - the assistant's abilities will be expanded even further.

Today, Microsoft announced another new addition to Cortana's repertoire, making it easier to keep track of promises you've made... and then forgotten about.

Working with Microsoft Research, the Cortana team has applied machine learning technology to enable the assistant to understand when you've made a commitment in an email - such as "I'll send you that report tomorrow" - and then proactively remind you to complete that task, without you needing to ask for a reminder. 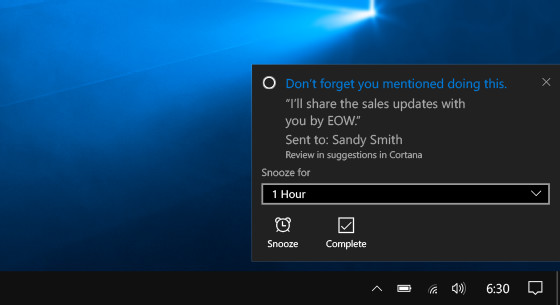 Cortana does all the work in the background making this helpful feature incredibly easy to use. To get started, simply send emails as you would normally and when you’ll do something, Cortana will recognize that and save the details in a suggested reminder for you. If you’ve specified a deadline in the email, Cortana will ping you before it’s due and save it in the action center. Other suggested reminders will be in the Cortana home.

The new feature is available today in the United States on Windows 10, and Microsoft says that it will expand to iOS and Android "in the coming weeks". It currently supports emails sent via Outlook.com and Office 365 work and school email addresses. Support for other email services is said to be "coming soon".

The feature is dependent on user consent, so if you don't like the idea of your emails being 'scanned' for reminders, that won't be a problem.

You can get a quick overview of Cortana's new Suggested Reminders feature in the video below: