With Windows 8 still the best part of a year from going on sale, PC manufacturers are eager to cash in on the growing market for the tablet form factor. This has given rise to some interesting and novel approaches as companies strive to find the best approach to tackle the dominance of Apple’s iPad in this sector.

HP half-heartedly attacked the market with webOS before limping off the battlefield with a bloody nose; more recently, Amazon has shaken things up a bit with its new Kindle Fire, which at its heart is based upon Android. Indeed, there are many Android tablets in various shapes and sizes out there, from the convertible Asus Eee Transformer to the latest ultra-slim and sexy Galaxy Tabs to India’s Aakash, the “world’s cheapest tablet” announced this week.

But some manufacturers are also developing tablets running Windows 7, despite the broad consensus that that operating system is far from ideal for navigating with one’s fingers. Tablets such as the Asus Eee Slate EP121 and Samsung’s new Series 7 Slate PC already offer Windows 7 in a keyboard-free form factor, and now it looks like Dell’s getting in on the action too. 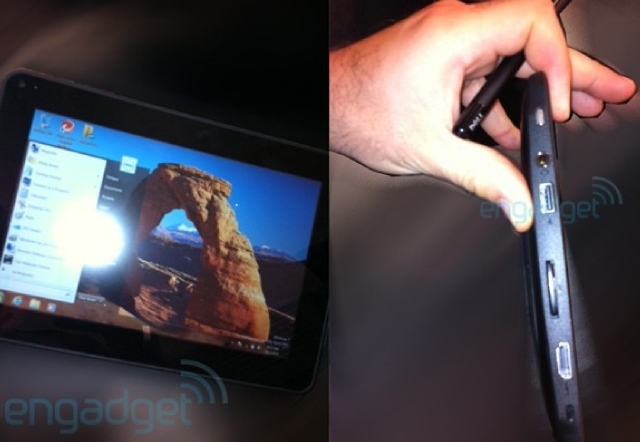 Engadget received images purporting to be those of a 10-inch Dell slate, and although the pics aren’t exactly high quality, they do seem to match up with a device previously seen on a leaked Dell roadmap in February as the ‘Peju’, and detailed further in July with claimed features such as Gorilla Glass, an active digitizer and a desktop dock.

The Peju appears to in fact be the new Latitude ST, which was first rumoured back in April, with some sites such as Softpedia and PC World hinting at an October launch; this would dovetail nicely with the leaking of images to Engadget now, suggesting the product is indeed nearing launch. Engadget’s tipster stated that the device has 2GB of RAM (while previous reports suggested there would be at least 4GB), and a USB port, memory card slot and HDMI port are all visible in the images above, along with a stylus with its own silo in the side of the device.

Additional specs leaked in July hinted at an Intel Core i5 processor and 64GB or 120GB SSD, as well as both 5MP rear- and 1.3MP front-facing cameras (a front camera appears to be visible above), along with GPS, 3G connectivity, accelerometer and 1080p HD-out.

Given the device’s anticipated Latitude branding, it would be targeted primarily at business users rather than consumers – which is perhaps just as well, given its anticipated price tag of just under $1000. It's also a good thing that they're not sticking with the 'Peju' name; in parts of Indonesia, 'peju' means 'sperm'.