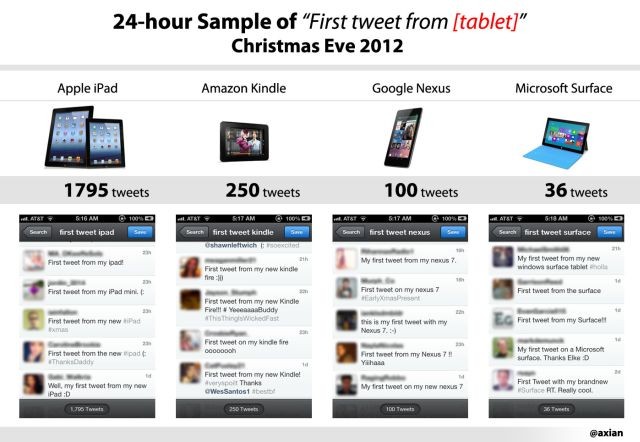 Microsoft expanded the number of placed you could buy its Windows RT-based Surface tablet to include Best Buy and Staples stores just a couple of weeks before Christmas. But was that extra push to sell Microsoft's first PC product worth it?

A new chart made by Twitter user A.X Ian shows just how many tweets were posted on Christmas Eve that were made as "first tweets" from various new tablets. The chart shows that a whopping 1,795 tweets came from a new Apple iPad, while Amazon's Kindle Fire came in second with 250 "first tweets".

Google's recent Nexus tablets were in third with 100 "first tweets" according to the chart - finally, the Surface came in a distant fourth with just 36 "first tweets" on Christmas Eve coming from the tablet.

So what does this mean? While this statistic is interesting, it may not mean anything in the long run. For one thing, Microsoft has been clear in the past that their first launch of the Surface tablet was designed to have a modest launch in terms of distribution. Therefore, the shipment numbers for the Surface were likely to be lower than those of the other tablets on the list.

As we have mentioned before, we also suspect that many people are simply waiting for Surface Pro, running on Windows 8 Pro, to be released before jumping into the Surface bandwagon. It's still scheduled to launch sometime in January.