One of the biggest downsides of being a devoted fan of gadgets and gizmos is the cost of fuelling that addiction indulging that hobby. Most can only look on with jealous eyes at the never-ending stream of new devices that continue to flow into stores, teasing us with their superlative specs and shiny buttons. Indeed, most tech fans find themselves having to pick one device which they know they’ll probably be stuck with for a while, and that makes the choice of selecting the right one particularly important.

Nowhere is this better exemplified than with our phones. Most buyers baulk at the idea of paying hundreds and hundreds of dollars up front for the latest handset, rendering us willing prisoners to the captivity of a long-term contract, in return for substantial discounts on handset costs. When the most competitive deals for the best devices require some users to sign up to three-year­ contracts, it makes sense to not rush into things.

This is a particularly interesting time for two reasons. First, there’s something of a glut of users emerging from their contracts at the moment, as millions of iPhone 4 buyers – notably, those who purchased in the first few weeks and months after its June 2010 debut – find themselves looking for their next device.

But this is an especially exciting time for the rest of us because of what lies immediately ahead. Every major mobile platform will soon see a new wave of devices and updated operating systems vying for the attentions of consumers. From the next iPhone to BlackBerry 10, from Windows Phone 8 to Android Jelly Bean, from Acer to ZTE, the next few weeks and months will see the launch of an incredible range of new smartphones.

Let's take a look at what’s coming up, and why it’ll be worth the wait.

The Windows Phone OS gets a major overhaul in its next release, due later this year, bringing a wave of new features including NFC support, VoIP integration, mobile payments via the new Wallet Hub, support for multicore processors and removable storage, HD screen resolutions, and over-the-air updates, to name just a few. Windows Phone 8 will also share a common kernel with Windows 8, which will bring considerable benefits for developers while offering more robust performance, as well as enterprise-grade security options, such as Secure Boot and BitLocker encryption.

But the new OS architecture and its many hardware-dependent improvements mean that Windows Phone 8 will not be available as an update for existing handsets. Buy a Windows Phone today, and you won’t be able to update it beyond the forthcoming Windows Phone 7.8 update, about which little is confirmed beyond the guarantee that it will bring a new-look Start Screen with greater customisation.

The good news is that we’ll get our first official glimpse of Windows Phone 8 hardware next week on September 5, at a joint Nokia-Microsoft event in New York, at which at least two new Lumia handsets are expected to be announced.

A few weeks later, HTC is expected to announce its new WP8 devices. It’s believed that there will be three new handsets from the Taiwanese manufacturer: the entry-level ‘Rio’, the mid-range ‘Accord’ and the flagship ‘Zenith’ with a huge 4.7” HD Super LCD 2 display and 8MP camera. Pocket-lint cites a source who is “very much in the know” as saying that HTC will announce its new Windows Phones in October, but the always well-informed Mary Jo Foley says she's heard that they'll debut much sooner, around mid-September.

Following the launch of its new ATIV S Windows Phone 8 flagship handset this week, Samsung is expected to launch a second Windows Phone device before the year's end, known by its codename 'Marco'. This mid-range handset is believed to have a 4-inch WVGA (480x800px) Super AMOLED display, along with the same dual-core 1.5GHz processor seen in its bigger brother. 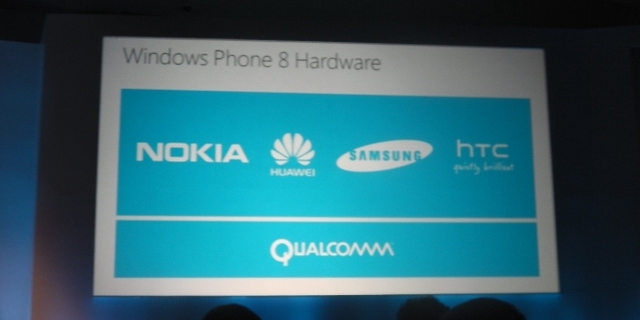 At its Windows Phone 8 preview event in June, Microsoft also named Huawei as one of its launch hardware partners, but still little is known about their plans. ZTE has confirmed that it too is working on Windows Phone 8 handsets, but the Chinese manufacturer has said that its first device won’t arrive until the second half of next year.

Even before the new iPhone has been announced, there seems to be a lot about it that we already know (or at least think we know).

One thing we can be pretty much certain of for the new fruitphone is the inclusion of 4G LTE support, especially since the iPad made the leap to 4G earlier this year. Equally likely is a new look for the device; indeed, there’s been a steady stream of leaks in recent weeks that all appear to point to the new handset looking something like this:

With its new design, we’re also expecting the screen size to make a jump from 3.5 to around 4 inches, along with a new 16:9 wide aspect ratio. Prevalent rumours from multiple sources indicate that Apple also plans to ditch the 30-pin connector at the base of the device, replacing it with a much smaller 8- or 9-pin connector that will also leave room for a headphone jack alongside it. If that’s the case, some of your existing iPhone accessories may not be compatible with the new model.

Beyond these examples, much of what is being said about the next iPhone appears simply to be wishful thinking or common sense. An improved camera and faster, more efficient processor are more or less inevitable, while the inclusion of the new Passbook app in iOS 6 hints at NFC support too - although some recent reports now claim that, "given the primarily metal backside of the new iPhone, it's highly unlikely that NFC is in the cards for this generation". A reminder, perhaps, that there's still plenty we don't know, and won't know, about the iPhone until it's officially announced.

The new iPhone is expected to be announced on September 12, with a possible launch just over a week later on the 21st. Even if you’re currently leaning towards a different device, it’s still worth hanging on just a couple of weeks to see what delights Apple will pull out of its hat to try to tempt you to the dark side to pick up its latest and greatest handset.

> Be sure to read our full review of Android 4.1 Jelly Bean

Frustratingly, precious few devices actually run Jelly Bean so far; Samsung’s Galaxy Nexus, Nexus S and Galaxy S III are all in the process of receiving updates (as is the Nexus 7 tablet), and various HTC handsets will also see the update, but new devices continue to be announced with no out-of-the-box Android 4.1 support to be seen.

But the good news is that there are still plenty of worthy Android devices on the horizon, even if most of them will launch with Ice Cream Sandwich. Next week, Motorola is expected to announce its RAZR HD (and possibly a RAZR MAXX HD) – on the same day as Nokia’s Windows Phone 8 launch event, curiously; the Droid RAZR M 4G LTE, which is also expected to get its official debut at the same event before heading for Verizon, was unceremoniously outed today by Engadget.

The HTC Desire X – known also by its development codename ‘Proto’ – has also made a few premature appearances lately. The mid-range handset is believed to have a 4-inch WVGA display, 5MP camera and 1GHz dual-core processor, but there’s no word yet on when it will be available to purchase. Meanwhile, TmoNews.com reports that a new HTC flagship device, the One X+, will be launching on T-Mobile USA next month with a powerful new 1.7GHz quad-core NVIDIA Tegra 3+ processor, although whether this beast will make its way to other carriers remains to be seen.

With the extraordinary pace of development within the Android hardware ecosystem – there are new devices coming out more or less every week – there simply isn’t the time to detail all the exciting new handsets that will be available to purchase this year. From the just-announced quad-core LG Optimus G with its 13MP camera, and LG Intuition with pen-input support, to that other larger-than-life ‘phablet’, the Galaxy Note 2, and the beautiful Sony Xperia SL, there’ll be no shortage of stunning Android hardware to choose from over the next few weeks and months.

RIM’s mobile ecosystem has had a tough time over the last couple of years, and the latest disaster came in the form of another delay to its badly-needed next-generation operating system, BlackBerry 10, which will now not arrive until the first quarter of 2013. But RIM remains bullish about its prospects, recently stating that mobile operators are “visibly and positively enthusiastic” about the new OS.

Currently, there remain many unanswered questions about BB10 and the first phones that will run the new OS. We do know that there’ll be two of them – a full touchscreen device with HD (1280x768px) resolution will launch first, and a second handset with both a 720x720px touchscreen and hardware QWERTY keyboard will arrive a few weeks later. According to The Wall Street Journal, this may extend to as many as six devices by the end of 2013.

Those outside of the BlackBerry community who have had time with BlackBerry 10 have spoken positively about both the OS and the early hardware that they’ve seen so far, and in spite of both RIM’s mistakes and the many challenges that still lie ahead, it’s encouraging to hear this kind of feedback.

Even so, we’re still a good 4-6 months from seeing those devices on sale, and if your mobile plan is already coming up for renewal, and you’re keen to get your hands on some exciting new hardware, that might be a bit too long to wait.

This summary has really only scratched the surface in exploring the many new devices that are heading our way (and there’ll certainly be plenty more that we don’t even know about yet). Of course, the curse of the mobile contract will always be the fact that no sooner have you signed on the dotted line and committed to a new device than something bigger, better and shinier comes along. With the incredible pace of development in consumer technology these days, that problem isn’t going to disappear anytime soon.

But with Windows Phone 8 and the new iPhone just weeks away – and plenty of new Android hardware being launched ahead of the holiday season – now is a terrible time for most users to buy a new smartphone. Even if you’re not fixated on buying the latest, most awesome new handset, it’s still worth waiting a few weeks, as prices on current hardware will inevitably drop as newer devices become available.

Indeed, in just a few weeks, smartphone buyers are going to be spoilt for choice like never before.


This article was updated from the original version to include new information on the Samsung ATIV S and HTC's Windows Phone plans.