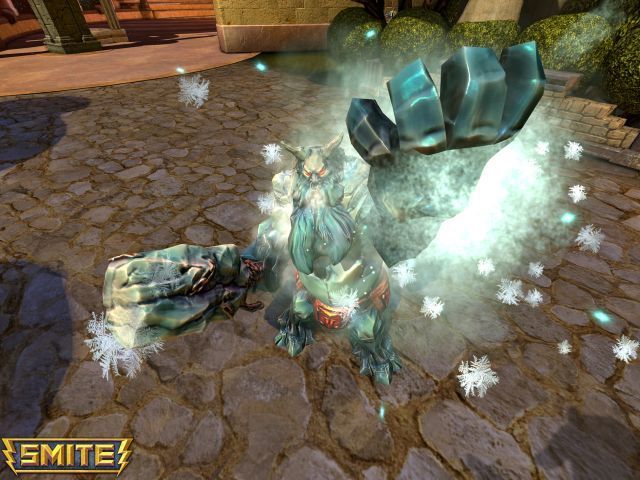 Hi-Rez Studios has already launched two shooter-style games in Global Agenda and most recently with Tribes: Ascend. For the developer's third game, they are creating SMITE, their own entry in the growing MOBA genre but with a somewhat different bent. We got Todd Harris, the COO of Hi-Rez, to answer our questions about SMITE which is currently in a closed beta test.

First, why did Hi-Rez want to enter a genre that already has a number of popular games available for gamers to check out?

With SMITE we wanted to make something a bit different in look & feel from the other games in the MOBA genre.The MOBA genre is popular for a reason - it delivers fun multiplayer action that can be played casually or very competitively.  But most of the other MOBA games are played with an isometric, over the top view like a real-time strategy game.  And clicking around the map to move just isn't that intuitive or immersive to many gamers, especially if you are controlling a single hero character.  We wanted controls that would feel familiar to players of action games or MMO PvP Battlegrounds as well as moba players.

How did the basic concept for SMITE come about?

We know and enjoy 3rd-person action combat from Global Agenda.  We started by protoyping a battleground game format using Global Agenda classes and NPCs.  It was a fun concept but we thought it would work even better with a fantasy theme and spells rather than sci-fi and guns.  By choosing mythology and different gods we would have a stronger theme, more diverse playable characters and we felt spells would work better in the MOBA format for mechanics reasons - for example with a gun players expect to be able to shoot a very long range but that does not necessarily fit with the pacing and visibility needed in our MOBA game.

What are some of the hero characters we can expect to see in SMITE?

All the playable gods and NPC characters come from mythology.  We are currently drawing on five families of mythologies for the gods.  We have Greek gods like Hades, Indian gods like Kali, Norse gods like Odin, Chinese gods like Sun WuKong, and Egyptian gods like Anubis.  The great thing about mythology is that we can have some very recognizable gods like Zeus but also super obscure gods like Vamana from Indian mythology - he changes from small baby form into giant form.

The game has more of a third person viewpoint than most games of this type. Why did you select to go that route?

In SMITE you are are not above the action but right in the middle of the action.  The camera is right behind your character.  We chose this closer third-person viewpoint so you are more attached to your playable god, you can see all the graphics and animations and special fx much more closely, and the combat feels a lot more intense.  And it really changes the gameplay and tactics because your map awareness is different.  You will not necessarily see that enemy sneaking up behind you out of the jungle.

What other elements will make SMITE stand out?

Every attack is a skill-shot that has to be aimed and can be avoided; rather than a lock-on attack.  Also, your god does level from 1-20 within each match and get more powerful, but players get into the action against other players early in the match vs. having a very long farming phase.  Beyond that, SMITE tends to stand-out based on the graphics and character design.  People want to be a god!

SMITE will be free-to-play.  Free players will have permanent access to five gods - Artemis, Ra, Ymir, Kali, and Sun WuKong.  Then additional gods can be unlocked with gametime or more quickly with microtransactions.

After the game's official launch, will Hi-Rez continue to keep updating the game?

Definitely.  We'll update the game with new gods, as well as cosmetic skins.

Finally, is there anything else you wish to say about SMITE?

Our Closed Beta started last Thursday and so far it is going very well.  Interested players can register for the Beta at www.smitegame.com.  We are also offering a Starter Pack pre-order for those who want to support the game and get access to the Beta immediately!  It is $19.99 and includes 10 gods in addition to the 5 free gods, plus ability to join Beta today.