The Electronic Frontier Foundation has concluded its analysis for 2014 of the privacy policies utilized by all manner of service providers operating online. Their findings show how several of the 26 well-known companies assessed had serious shortcomings in their privacy protection policies and the report, freely available on the Electronic Frontier Foundation's website, names Snapchat in particular as having severe failings. It earned just one star in the 'publishes law enforcement guidelines' category, out of a possible six. Amazon only achieved in 'requires a warrant for content' and 'fights for users privacy rights in courts'. AT&T were the only other company to gain just two stars, with merit given in the 'publishes transparency reports' and 'publishes law enforcement guidelines' categories.

Apple, Credo Mobile, Dropbox, Facebook, Sonic.net, Twitter, Yahoo all gained six stars. Apple was particularly praised, as in the past three reports undertaken by the foundation they were only rewarded with one star. Microsoft also gained six stars despite the foundation slamming the company earlier this year over allegations that it viewed the email inbox of a company employee who was suspected of leaking Windows code. 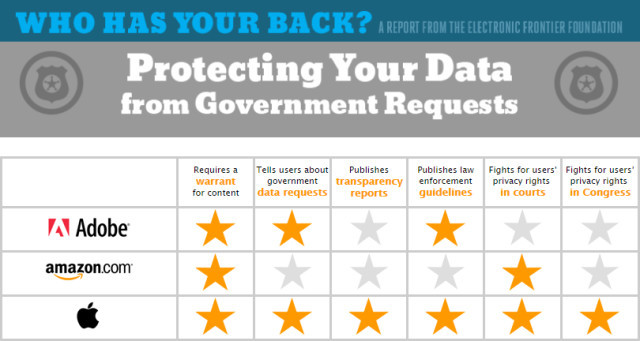 The foundation aims to bring more transparency to consumers by informing them of how their data is used by the companies that hold them. Their annual 'Who Watches Your Back' report highlights areas where companies are failing to protect their consumers' data protection rights.

Snapchat responded to their mediocre one-star rating by explaining how it had made 'mistakes' during its early days, but was now working to fix the issues. Now that the company's failings - and those of the two-star rated AT&T and Amazon - have been made public, perhaps we will notice a bigger push in the near future by the named companies to make their privacy policies more transparent and understandable. Or in other words, that they are no longer failing customers on the complex subject of how user data should be stored, maintained and protected.