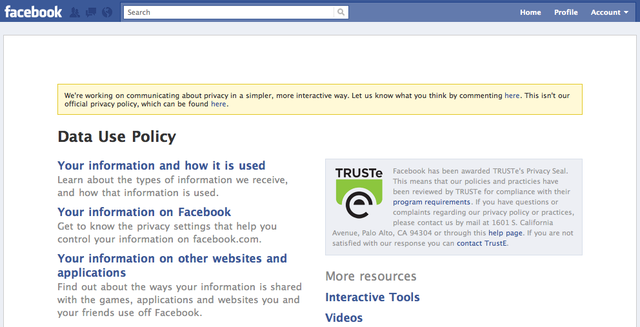 In a statement, the company said that the problem with many websites' privacy policies is that they are written for privacy advocates and regulators and not for the people that actually use the website. Facebook hopes to change that with its new layout which promises to be easier to read and understand, to be visual and interactive, and to focus on questions that Facebook users are most likely to ask.

Facebook is confident it will change the view of users who have once called their privacy policy "'5830 words of legalese' and 'longer than the U.S. constitution – without the amendments.'"

However, it's important to note that the base of what the policy states has not changed; though, Facebook did concede that in efforts to simplify the concepts a few things may have been added or taken away. They are encouraging users to provide feedback on the change in layout so that they can take it into account and make the layout "even better," but the general consensus has been positive thus far.

You can view the new privacy policy format at Facebook.com, and the old (and official) one is still up to be read as well.