Facebook's 'Sponsored Stories' concept has been one advertiser's could definitely fall in love with. The concept meant that your face and status update could be displayed with their product on Facebook's sidebar, should they be linked in some way. Obviously this was doing the advertiser's job of adding a human element for them, and therefore, it meant that people could be more receptive to the content being thrown at them on the right-hand side of their Facebook. Then the lawsuits came (we haven't seen this before!), and Facebook could have lost up to $10,000,000 over users disputing the usage of their details in advertising.

Except it didn't. They probably would have been happy enough with losing $10,000,000. They have to pay out $10.3 million to the class-action lawyers alone, and then some more into a fund for the "recognized leaders in the fields of online advertising, privacy and safety". Then they have to give their American userbase the choice to opt out of Sponsored Stories; all 153 million of them. Economist Fernando Torres - not to be confused with El Niño Fernando Torres - predicts that the company could lose more than $103 million in the coming two years. The numbers he had access to were given under special access alone, and were redacted from publicly available documents.

If Torres is accurate about the losses then Facebook is set to lose more than one hundred and twenty million dollars in the coming two years. 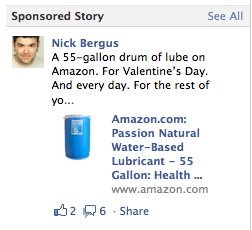 Happy Valentine's to you too, mate.

Users will now be able to decide for themselves whether they want to enter into stories or not, but also they will be able to see what stories they might already be part of. For all you know you could be a lubricant salesperson without even knowing it. Be careful what you Like, because advertisers might like it and promote your comment as well. The victory in the lawsuit should doubtless please those who might not have been too fond of the past 18 months with the site, questioning how safe their data with the service may have been.

We previously covered Facebook's Sponsored Stories problem a few days ago, though it seems now that their issue will go deeper than contributing some money to charity in response. With the frequency of lawsuits being brought against Facebook, it is no surprise to find that the company is forced to continually do more to fight against them. The contribution to charity, while noble, does not appear to have been sufficient to settle the matter with the claimants. Facebook had no response at the time the documents were made public and they still do not. It is entirely possible they will choose to remain silent about the issue for the future, since the potential loss of money is likely aggravating.