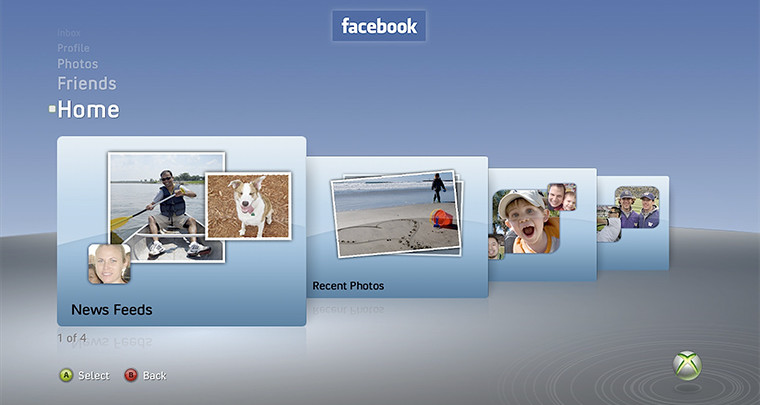 The Xbox 360 Facebook app featured a design that hadn't been updated in years.

Microsoft has been building its Xbox 360 app marketplace for several years now, but it appears two of the first apps the company launched for the gaming console are no longer going to be provided by the company.

When Microsoft began rolling out the new version of its Xbox 360 dashboard earlier this week, two major apps were subtly removed from the Xbox 360 app marketplace: Facebook and Twitter. The social media apps were first released Nov. 17, 2009, along with apps for Last.fm and Zune, which made them the first apps released on the console following Netflix's launch on Nov. 19, 2008.

Now, about three years later, the apps are no longer listed in the Microsoft console's list of apps available for download. Prior to the new dashboard's launch, Microsoft hadn't indicated the apps would be removed from the app marketplace. Despite the delisting, both apps are still included on Microsoft's "Be Entertained" page that the company uses to promote its Xbox Live service partners.

When asked if the social media apps will return to the Xbox 360 marketplace at some point in the future, a Microsoft representative issued the following statement on behalf of the company: “We are retiring the Facebook and Twitter apps. Xbox LIVE subscribers will have the ability to access these sites through Internet Explorer on Xbox, available through the Web Hub located on the new dashboard.”

Now that Internet Explorer has been made available for the console, users can pin the social networking sites to their dashboard. Having a browser available has never prohibited social networking apps from being included in app stores for smartphones, tablets and other devices, however – Microsoft has released its own Facebook app for Windows Phone 8, which has Internet Explorer built in.

Though the apps are no longer included in the app marketplace, users who previously downloaded the Facebook app can still launch it from the quick launch option by pressing the guide button on an Xbox 360 controller. The Twitter app was entirely web-based and never downloaded to a user's hard drive, however, so that app can no longer be accessed.

Whether Xbox 360 users will actually miss the apps is debatable. Neither had been updated in years, and the Facebook app actually incorporated a user interface that was two dashboard generations old.