While Firefox Quantum 69.0.2 was only released last week, the browser is set to receive another point release to correct a couple of issues before version 70 hits the stable channel on October 22. At that point, the browser will pick up a refreshed logo and a new name of Firefox Browser, dropping the Quantum branding that was introduced from version 57. 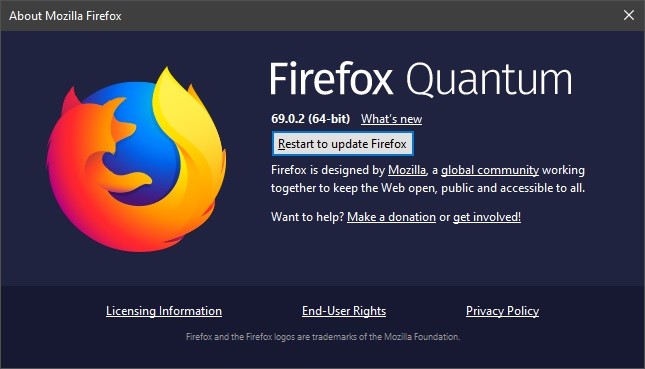 Before then, Firefox Quantum 69.0.3 now appears to be rolling out to users in the stable Release channel to correct a couple of specific issues for users, according to the release notes available on the Mozilla website:

More specifically, the first of these two issues caused empty files to be created when users attempted to download files while Windows 10 Parent Controls were activated. This bug seemed to be a regression related to a prior fix introduced in version 69.0.2 that attempted to fix the detection of active Parental Controls in Windows 10.

if you have been affected by the above two issues since upgrading your Firefox browser to 69.0.2 you can force a check for available updates by clicking on the menu button > Help > About Firefox and then click "Restart to update Firefox" to finish off the process.