Within the last week, the Mozilla wiki has been updated to detail the changes that will land in the Firefox web browser going into 2017. The main themes set out in the roadmap include bringing the browser up to par with its competition, extending its lead in personalisation and customisation, and how Firefox will deliver the best of the web in a way that is more useful and navigable than on any other browser.

A lot of the details that are laid out in the roadmap are things that have been known about for a while,.However, this is the first time we've seen all these features pulled together into an easy-to-read roadmap. The main features and changes that'll be incorporated into Firefox that are present in the roadmap include:

In the third quarter of 2016, the focus will be on shipping multi-process Firefox to around half of Firefox users. Also in this time frame, there will be 'major strides' in customization with the preliminary launch of Web Extension support, an improved security program for extensions (add-on signing), and the introduction of a Discovery Pane in the add-on manager to make discovery of new add-ons easier. 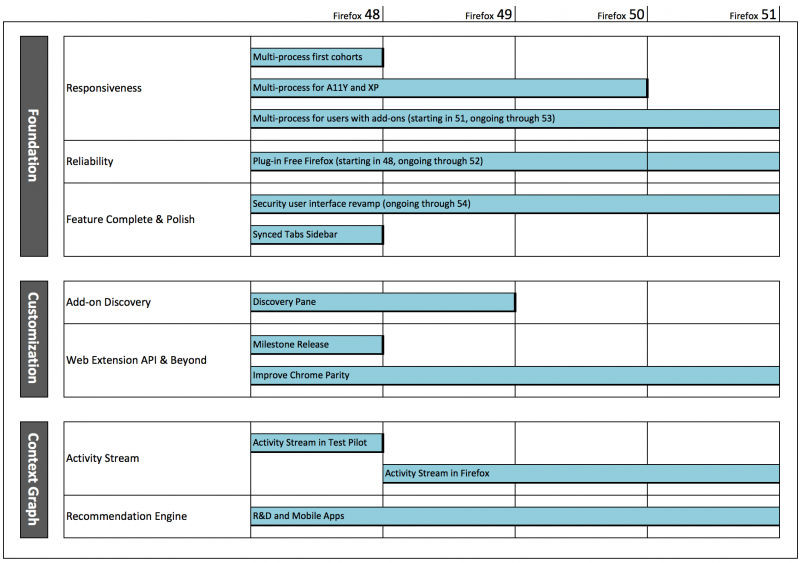 In the fourth quarter of 2016, Mozilla will focus on research and developments of the Firefox recommendation engine and prototyping recommendation apps. In this time frame, more users will get E10S enabled in their browser.

Finally, as we begin the new year, Firefox users will begin to receive Activity Stream, the first Context Graph feature which is undergoing voluntary user testing in the test pilot program. The Activity Stream will replace the home page and offer a better interface for sites you visit regularly, your browser history will be shown as a timeline, and highlights from your browsing will be given.

Firefox is currently at version 47 and new releases come roughly every six weeks. Future releases of Firefox will be released on: