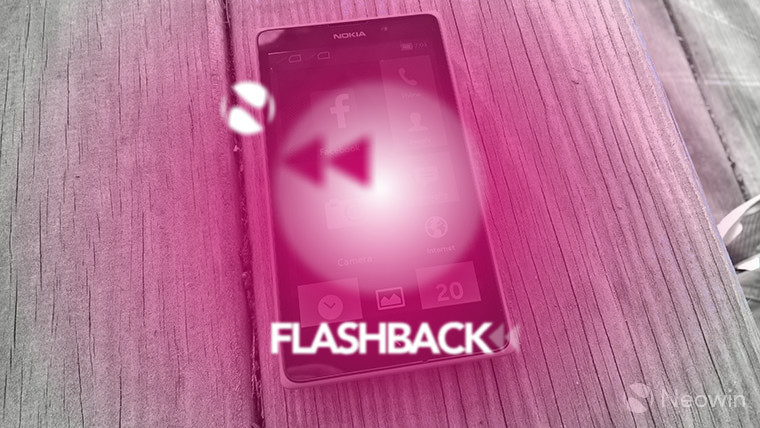 Nokia made some brilliant Windows phones. In fact, they were some of the most highly regarded handsets of their time. Of course, Nokia ultimately failed, in the end selling off its devices division to Microsoft.

Since then (and even before then), technology enthusiasts have made the same obvious statement: "If only they had used Android..."

It's a reasonable point. Phones such as the Lumia 1020, 930, and 1520 would have been very different if they had used Android instead of Windows Phone, and today's market might well look rather different. For one thing, Windows phones wouldn't be synonymous with great cameras.

Every Android OEM has its own "skin" - or a brand of Android that looks different from "stock" Android. HTC has Sense, Samsung has Touchwiz, and so on. So what would Nokia's skin look like?

There's actually a couple answers to that question. These days, the answer is the Z Launcher, something that you can find on the Nokia N1 tablet, or you can download from the Play Store. In fact, Nokia recently announced a return to smartphones, so you can probably expect to see more of the Z Launcher, but that's not what we're here to talk about.

Back in 2014, Nokia's vision for Android was the Nokia X platform.

You see, Android is open-source, but companies like Samsung and HTC only change the OS so much, because there are limits if you want to include Google Play Services on a device (something that has landed Google in a bit of hot water in the EU). Nokia went the AOSP (Android Open Source Project) route, creating an Android "fork".

The firm isn't the first big name to take the AOSP route. Amazon does the same thing with Fire OS. If you've ever used a Fire tablet or Fire TV Stick, you've used AOSP.

The Nokia X platform was launched with three equally horrible devices: Nokia X, X+, and XL. Here are the specs:

As you can see, the hardware sat on the very low end. Even the 1 GHz Snapdragon S4 Plus that you'd find in a Nokia Lumia 520 outperformed these guys.

In fact - at risk of losing any and all credibility - I'd say that the software itself wasn't half bad. Sure, it wasn't perfect, but given decent hardware and a few iterations, it had potential. Then again, as someone who uses so many phones with the same operating systems, I do find it refreshing to see something different, so I may have a personal bias.

The design of Nokia X was clearly modeled after Windows Phone. It used tiles; however, they were static. It sort of defeats the purpose of a huge tile if it's not feeding you additional information like a Live Tile does. 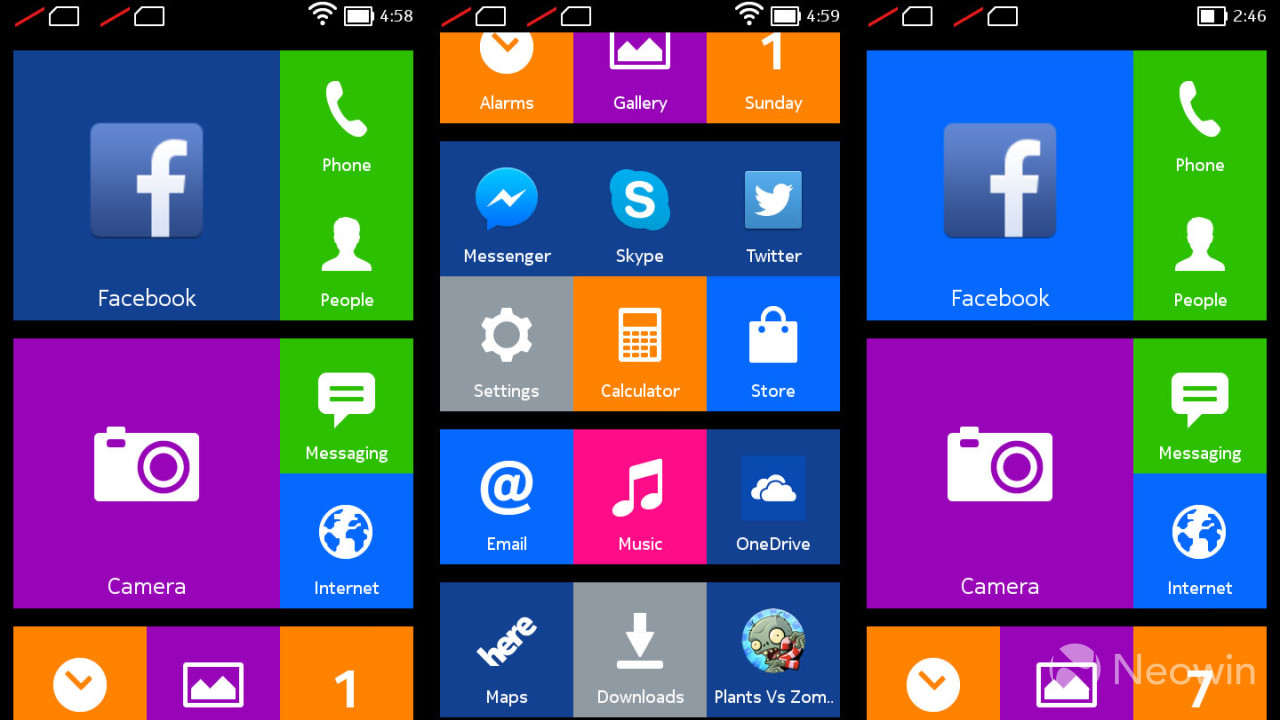 You might notice that there is one tile that changes every day, and that's the Calendar application. Of course, everything else remains static.

You'll also notice that some rows are joined together while others remain separate. There seems to be no rhyme or reason as to why this is, other than the ones where a tile has been enlarged.

But that's not all. If the lack of Live Tiles won't satisfy you, you do get one customization option that's a trademark of Android: widgets. You can also group those tiles into folders, as well as change the colors of the tile for third-party apps, but no, you can't change the color of a folder.

It's worth noting at this point that Windows Phone never had support for widgets, and at the time that Nokia X was announced in February 2014, it didn't have official support for folders either. That would come later that year in Windows Phone 8.1 Update1.

Another thing that Windows Phone didn't have at the time is a notification center with quick settings. Of course, Windows Phone 8.1 was just a couple of months away at this point.

Perhaps the oddest part of Nokia X was the lack of an app drawer. This was just peculiar. Swiping to the left or to the right would bring you to the Fastlane, a list of all of your recent activities. In fact, this was similar to Nokia's Asha devices. 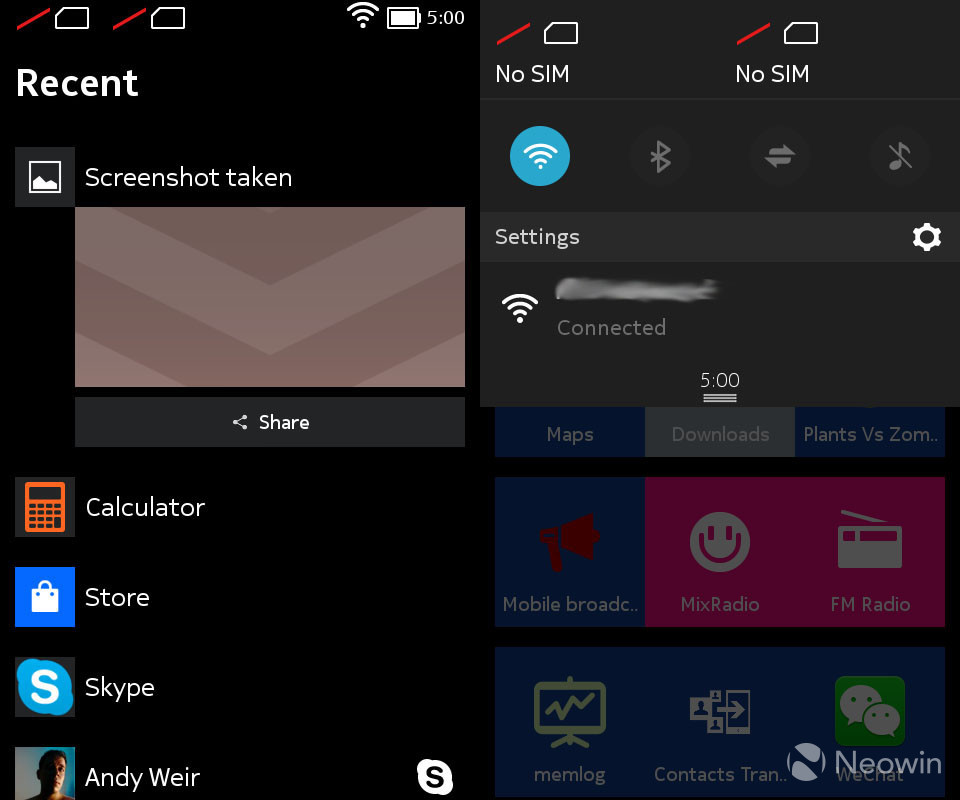 And then there's the lock screen. The stock images for the lock screen are similar to the ones found on Lumias; however, it shares the card-style UI for notifications that can be found on Android. 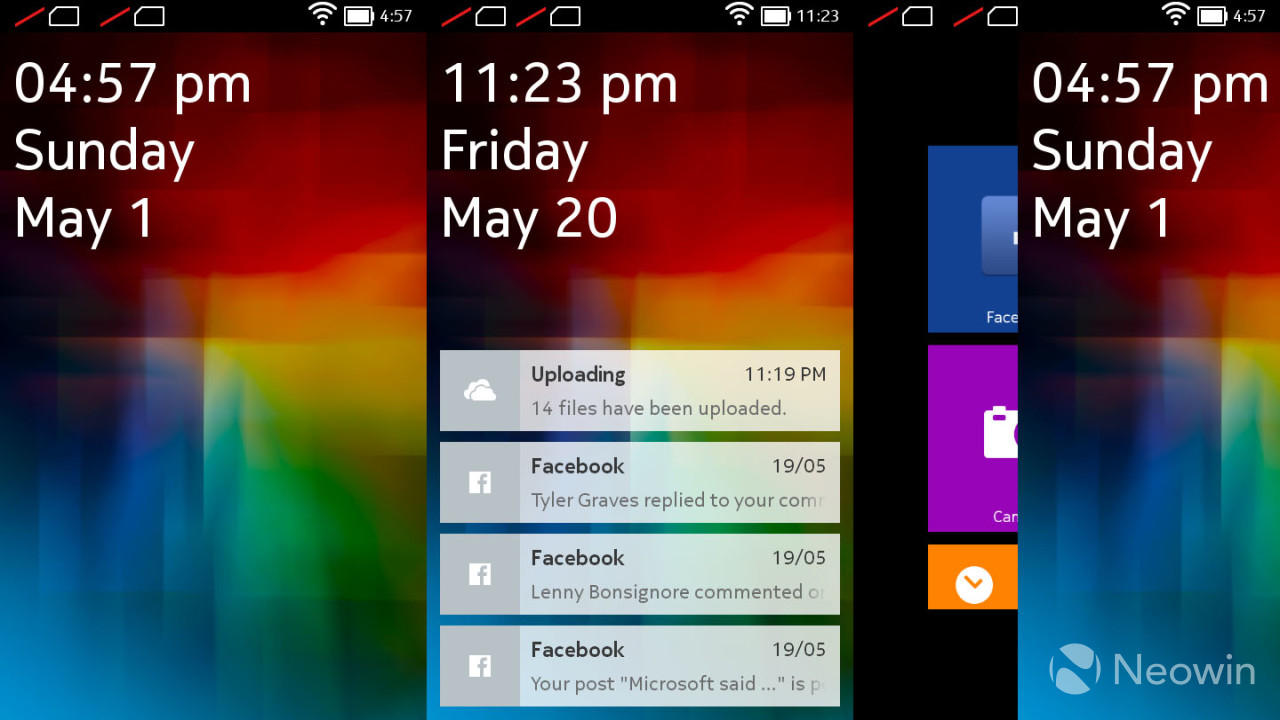 Of course, it wouldn't be Android if it didn't have two of something. There are no Google apps here, so there aren't duplicates of much, but we do have duplicate browsers. Nokia X has Internet and Opera. Have a look. 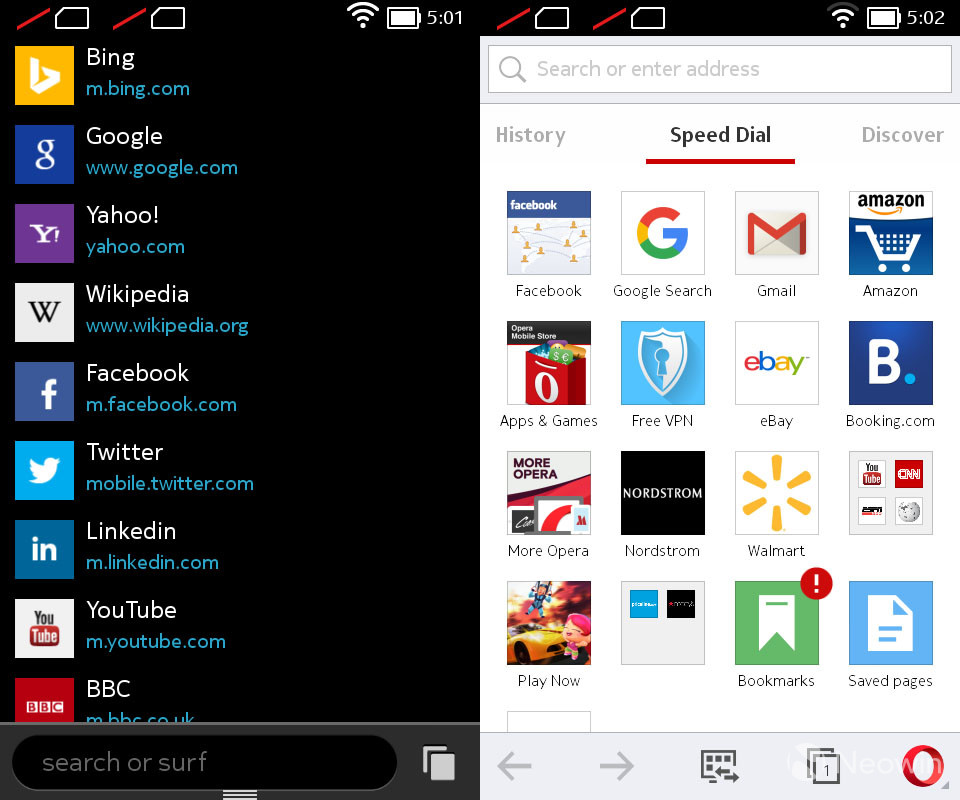 And then there's the Store, which is also branded as Opera. The thing that I found most entertaining about the Store is that upon opening it, you're greeted with an advertisement for a Microsoft Lumia 650.

Perhaps the most disappointing part of it is that you'll be asked to update certain apps, but you'll get errors when you try to do so, telling you that a software update is required. But there is no software update, although there should have been, but we'll get to that in a bit.

Now keep in mind, all navigation is done with a single back button. It wasn't the most intuitive setup, but it got the job done. I quickly found that holding the back button is a shortcut to the home screen (or Fastlane, depending where you last were).

While it might seem like having back and home buttons might be all you need, most modern devices have at least three buttons, and at least two of those have dual functionalities. For example, on a Windows 10 Mobile device, holding the back button will bring you to the multitasking screen, and holding the Start button will take you to a one-handed mode.

The same goes for Android. Holding the home button will open Google Now, and starting with Android N, holding the multitasking button will launch a split-screen view.

Apple, on the other hand, has a single physical button that you can press. Because of this, an iPhone can differentiate between a double tap (one-handed mode), double press (multitasking), single tap or press (TouchID), single press (home), and long press (Siri), all providing different functionalities. 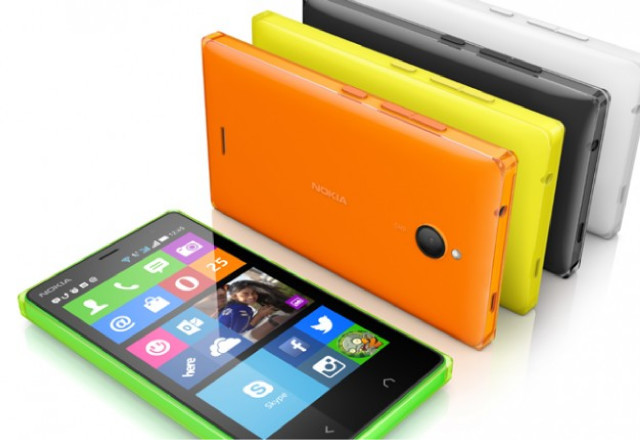 The version of Nokia X that we just went over is 1.1, based on Android 4.1.2 Jelly Bean. There was a version 1.2, which added an app switcher and apps like Outlook.com and OneNote, but it would appear that those updates aren't available anymore.

Then came Nokia X2, which was a device, as well as a version of the software. You see, the original trio of devices were never to be updated to the new OS.

Probably the most important improvement in X2 was support for a home button, now allowing for two buttons. It also features a fourth row for tiles and some other cosmetic improvements. Version 2.0 also brought the Android version to 4.3 Jelly Bean. This was the only bump in Android version that the OS ever got.

Nokia X version 2.1 actually brought support for some Google services. On top of that, it added support for lock screen widgets and live wallpaper.

The fate of Nokia X

Of course, Microsoft ended up purchasing Nokia's devices and services division. Naturally, Nokia's Android efforts for the time being would come to a close.

While the software is dead, the hardware lived on. Microsoft did promise that some of the Nokia X hardware that was in the pipeline would be converted into Windows phones.

Of course, these days, Nokia is an entirely different company. They're only now emerging from their deal with Microsoft, once again able to make their own phones. Those phones will run Android, of course, but we won't see a return of Nokia X.

It's more likely that those phones will use Nokia's in-house Z Launcher, which was mentioned above.

Nevertheless, it's always fun to look back on what was and what could have been. In the time that I spent looking back on the Nokia XL that I used, I had to ask myself, what would have been different if they actually used decent hardware with these devices? Sadly, we'll never know.