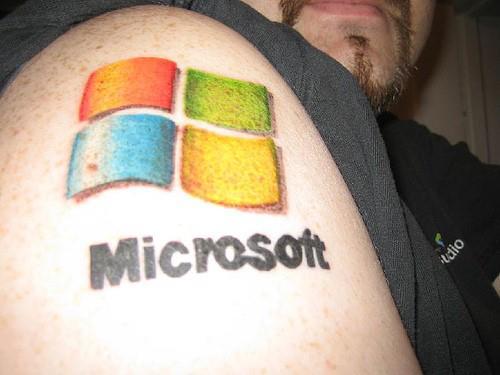 This picture was shared earlier on Facebook by Microsoft Netherlands and you kinda have to give it to the guy: he's got the Visual Studio shirt, the Windows 7 logo and the Microsoft logotype. It's pretty clear he's a Microsoft fan. Unfortunately for him not everyone loves those symbols as much as he does, and that includes Microsoft who have been trying hard to distance themselves from their past.

They've been trying so hard that actually none of this guy's tattoos makes any sense now. First of all we have the Windows 7 logo. That logo was actually first introduced in Windows Server 2003 and Windows Vista a bit later (we all remember how the latter turned out). Windows 7 adopted it and cleared its name, but the new kid on the block, Windows 8, has a completely different and new logo, in tune of its metro/modern design language.

Then comes the Microsoft logotype. It was used for almost 25 years being introduced in 1987, and then replaced in the summer.

The new Microsoft logo maintains the colors of the old Windows logo but squares the tiles to make them look more Metro. The font and the color has also changed, the company opting for its own Segoe.

So here's one example where you might be a hardcore fan, but the company you love is leaving you behind. Or it might just mean that it's simply a pretty dumb idea to get a tattoo of a company's logo. Oh and if one tattoo seems dumb, how about three of them? And then legally changing your name to " Microsoft Zune"? Beat that fanboys.