It's one of the most popular third party Twitter clients for Windows Phone and today the developers of the app glƏƏk! have released a new version for WP8. The app costs $1.99 to download but a free trial version is also available. 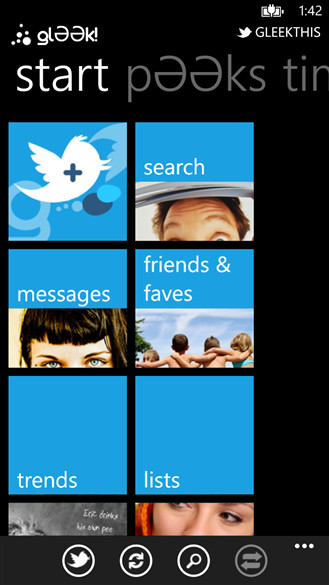 The app, created by Liquid Daffodil, has added some new features that can be used just by Windows Phone 8 users. One of the big new additions is the ability to use voice recognition from within the app in order to compose and send out messages and replies. Another new feature will allow smartphone owners to set up glƏƏk! to place high resolution wallpapers that will be displayed daily on their phone's lock screen.

The official glƏƏk Twitter account has been in use since the app was released and the developers have been offering up some quick support for those folks who are updating from the old Windows Phone 7.5 version to the new Windows Phone 8 app. One message states, "If you 'own' the app by using the Magic Hashtag, and WP8 update says you're 'expired', email us and we'll reset you." The team also suggests a complete uninstall and reinstall if users are having issues saving their preferences.

The team will also be adding more languages for the new voice recognition feature in the future, saying, "If you want to help us implement Speech for your language of choice email us ASAP before we submit next update!" The team has already released a version of glƏƏk! for Windows 8/RT.