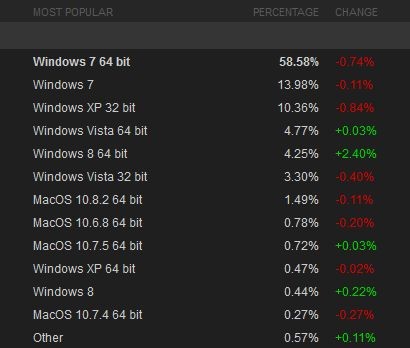 We already know how Valve founder Gabe Newell feels about Windows 8 (hint: he doesn't care for it very much) but that is not stopping some of the tens of millions of users of Valve's Steam gaming download site from running the Steam client on their gaming rig.

In the newly updated Steam hardware stats web page, which shows the numbers Valve collected from some of its Steam users in November, the combined market share of Windows 8 32-bit and 64-bit users is shown at 4.69 percent. That's well ahead of the stats shown by StatCounter and Net Applications, which showed Windows 8 is being used by 1.44 percent and 1.09 percent of PC owners, respectively.

The stats page for Steam also shows that its Windows 8 users already outnumber the number of its Mac OS gamers. The total amount of Mac Steam gamers now stands at 3.26 percent. Valve launched the Mac Steam client well over two and a half years ago. Steam's hardware stat numbers is an optional feature in the Steam client which lets users send their hardware information in their PC to Valve.

It's not a shock to learn that Windows 7 is by far the OS that is used most by Steam gamers. The November numbers show that the combined share of Windows 7 32-bit and 64-bit users is now at a dominating 72.56 percent. Windows XP is still being used by 10.83 percent of Steam gamers, and the much maligned Windows Vista is still installed in a total of 8.07 percent of Steam PC rigs.