In the past year or so, Google has seen some major competition, mainly in the form of Microsoft's Bing. Bing offers what is referred to as a "decision engine," boasting a lot of features that the current market share king, Google, does not. Of course, this works both ways, though one thing a lot of people noticed is that Bing looks far more up to date than its main competitor, which has used the same homepage design for years (with a few tweaks as time has gone by). The company appears to be fighting back, and has started rolling out a redesign of its homepage, featuring a new search page and other additions.

Google's new design, originally discovered in November 2009, has brought their famous logo up to present day standards, with it looking much sleeker than it did previously. The search page allows users to change their location in order to get country-relevant results, and has altered the menu of the various options found on the search page before. It's certainly a welcome redesign, though it's unclear when everybody will have access to it; it was first found near the end of February, and since then, the situation hasn't changed much. Nevertheless, Google is notorious for making as few changes as possible to its website (in order to keep the brand image alive, as everybody knows Google for its simple white search page), so it's always interesting when they do make some modifications. In December 2009, the search giant created a fade-in effect for its home page.

Testers of the new design for Google News voiced their opinions against it last month. One tester said "Horrible, if it doesn't revert to something similar as before will leave to another news source." There's no official word from Google on the new design. 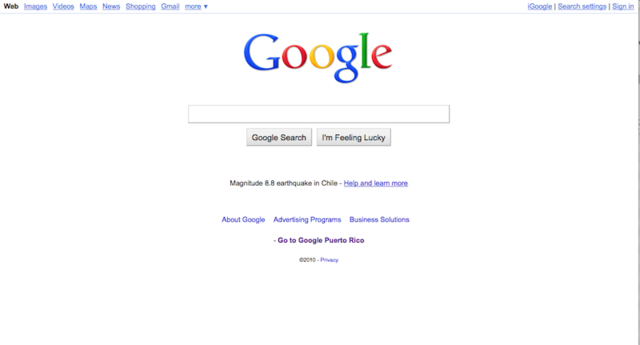 Thanks to Javier Ocasio for the images, which can be found in full-screen here and here.