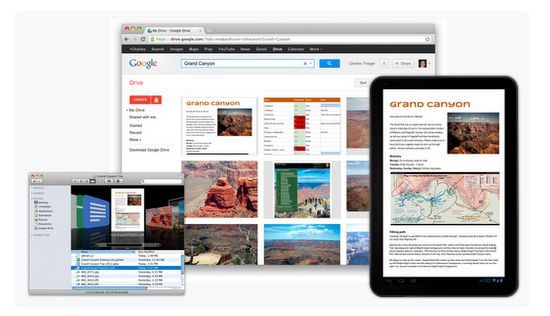 After over two months of rumors, Google has finally lifted the lid off of Google Drive. It's the company's entry into the cloud-based file storage service business that already has several competitors, including Microsoft's SkyDrive, Dropbox, Box and others.

In a post on Google's official blog, the company details what users can expect of Google Drive. First, the important stuff. You can use up to 5 GB of storage space on the service for free. However, much like Microsoft's just revamped SkyDrive, you can also purchase more storage space. Paying just $2.49 a month brings the storage limit to 25 GB.

Google Docs has been integrated into Google Drive, where users can collaborate on documents inside the cloud drive. Google states, "Once you choose to share content with others, you can add and reply to comments on anything (PDF, image, video file, etc.) and receive notifications when other people comment on shared items."

Google has also released a Google Drive app for Android-based smartphones and tablets and the company says it is working on an iOS app as well (sorry, no word on a Windows Phone app).  Google Drive also has extensive search features and can even search for words inside a scanned image of a document, such as an old newspaper clipping. It adds:

We also use image recognition so that if you drag and drop photos from your Grand Canyon trip into Drive, you can later search for [grand canyon] and photos of its gorges should pop up. This technology is still in its early stages, and we expect it to get better over time.

The company says it is working with third party app developers to make software that will work with Google Drive. Those apps will provide users with even more additional features.

Update - The Google Drive account page has more levels of storage space available to purchase, all the way up to a massive 16 TB of storage for $799.99 a month.