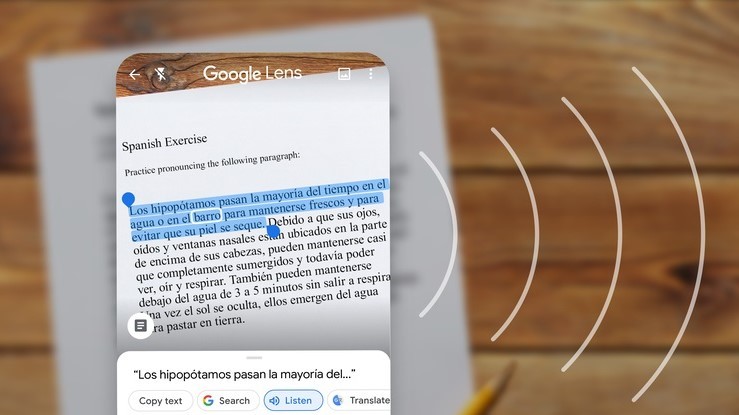 Exactly one year ago today, Google introduced a handful of Google Lens enhancements during Google I/O, including the ability to see information about items on restaurant menus, calculate the right tipping amount by scanning a bill, and more. Today, even without Google's developer event, more improvements are making their way to the Google Lens app, this time with a focus on learning and productivity.

For starters, it's now possible to use Lens as a way to copy real-life text to your computer. After scanning text with Lens, you'll be able to copy it not just to your phone's clipboard, but also to a computer running the latest version of Chrome. Of course, that requires that you use Chrome in the first place.

Another new feature is the ability to have words read aloud in foreign languages. Previously, Google Lens could translate text, but now it can also read foreign languages, so if you're struggling to pronounce a certain word, this is a feature that could help with that. Finally, Google has made it so that you can select scanned text and search for it on the internet quickly, thanks to a new search button. The goal is to make it easier to learn about certain concepts you might be reading about.

Google says all of these features are rolling out today, but the ability to listen to spoken text is only available for Android. iOS users will be able to use it sometime soon.