Google Drive’s File Stream service, the G Suite (Enterprise) version of the cloud services’ Backup and Sync, was down earlier today. This service enables users to access files in My Drive, Team Drives, and stream files on demand or sync only individual files, a function that saves local storage. Users began noticing (via 9to5Google)﻿ a “Drive File Stream is not enabled for the account” error that prevented file streaming from the cloud service.

The G Suite Status Dashboard on Google Drive’s Service Details page acknowledged the issue, with the firm stating that it was investigating the reports and working to provide updates. The message added that some users were experiencing error messages, high latency, and other unexpected behavior. However, the issue did not deter the ability to access Google Drive itself, and the company suggested that users facing issues use the web interface to access their files. 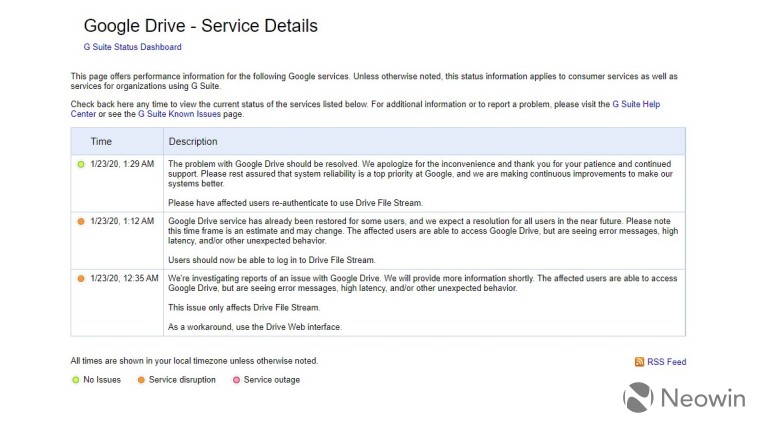 Luckily, the issue was resolved within an hour, with the status page now indicating that there are no issues with the service. Affected users, however, would need to re-authenticate to use the File Stream service.

With the service being down for less than an hour and a workaround in place for those affected, it is possible that the impact to Enterprises using G Suite would have been minimal. If you were one of the users facing issues with the service, it is best recommended to re-authenticate and check if the sync is back up.