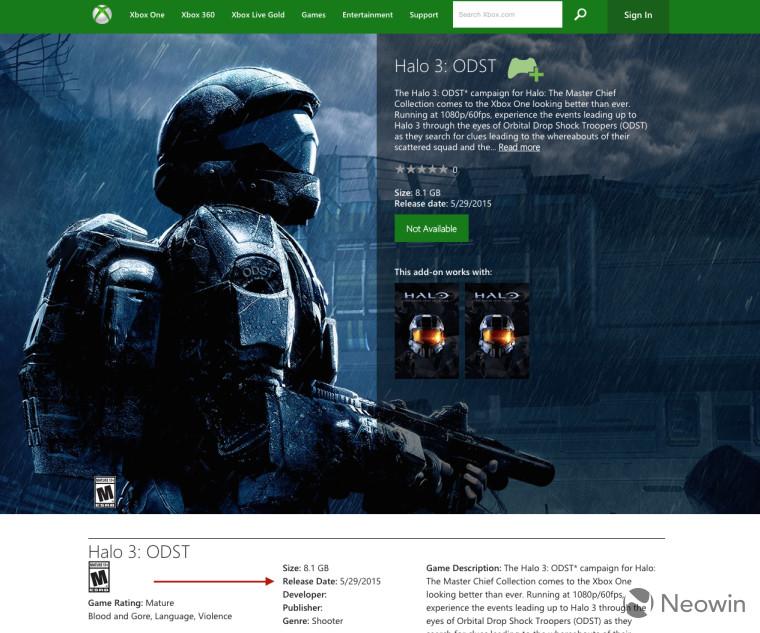 Microsoft appears set to release the "Halo 3: ODST" downloadable add-on for "Halo: The Master Chief Collection" on Friday, as a page on the company's official Xbox website listed the date of release for the expansion as May 29.

As Microsoft announced last month, "Halo 3: ODST" is scheduled to be released as a downloadable add-on for "The Master Chief Collection" before the end of May. A listing on the Xbox website, which has since been taken down, said the expansion would be released on Friday. A screenshot of a cached version of the page can be seen above. The date would make sense for a release, as Friday is the last weekday during the month of May, Microsoft's stated deadline for the add-on.

The downloadable content will be free to those who played "The Master Chief Collection" on or before Dec. 19, Microsoft previously announced, while all users will receive a new multiplayer map, Relic, which has been remade from its original "Halo 2" form. Users are getting the two downloads as part of an apology from Microsoft for the massive problems that have plagued "The Master Chief Collection" since its launch last year.

Update: Microsoft's official Halo account on Twitter has said the Xbox store listing featured a "placeholder release date" and that the add-on is still in testing.

A placeholder release date for the ODST campaign for Halo: The Master Chief Collection was inadvertently listed on the Xbox Store. (1/2)

We continue final testing and will make an official announcement once our release date is determined, and apologize for any confusion. (2/2)