Bing has officially celebrated its first birthday, after it replaced Live search one year ago.  Bing has become a staple in Microsoft's search engine war, competing against Yahoo! and Google.  The “decision engine” wanted to redefine the way users search for material, making information more accessible and straight to the point.

The Early Days
Bing released its first commercial shortly after the decision engine went public.  The minute long commercial featured the tag line “Bing and decide,” which promised to end “search overload.” Bing eventually upgraded from the beta status in November, and added new features such as Video and Visual Search.  Bing became the official name for the search engine, replacing the brand “Kumo.”

Bing only launched with a few features including web, image, travel, video, news, and maps search, but later added features like Visual Search, powered by Silverlight.

Yahoo! Deal
The deal between Microsoft and Yahoo was a back and forth discussion and rumour mill that left both users and employees scratching their heads on when, or even if, this deal will happen.  Rumours spread quickly that Microsoft was going to purchase and acquire Yahoo, but was quickly shot down by Ballmer.

The finalized deal would replace the Yahoo search engine with Bing for 10 years.  The deal between the companies would allow Microsoft to use Yahoo's search technology to refine the Bing search engine and was said to be fully implemented within 24 months after the signed deal.

Market share
Bing started off fairly strong in terms of market share, capturing 2.96% in its first month debut.  The search engine had a steady growth of the next few months, eventually peaking out at 3.52% in August 2009.  Bing still continues to maintain the same amount of market share, ending with 3.24% in May 2010, according to Netmarketshare.com. 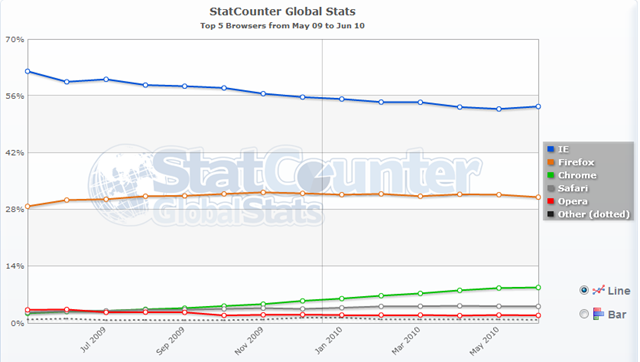 Bing's greatest challenge is to dethrone Google as the king of search engines.  Google's biggest advantage is it's brand.  Google, as a brand, is known around the world in just about every country, set as the default search engine in almost all the main browsers, including Firefox, Safari and, of course, Chrome.

However, Microsoft still holds the current top spot in browser market share, the key to making Bing a success.  Internet Explorer holds 54.75% of the marker share in the U.S., while the closest browser, Firefox, has captured 29.75%. 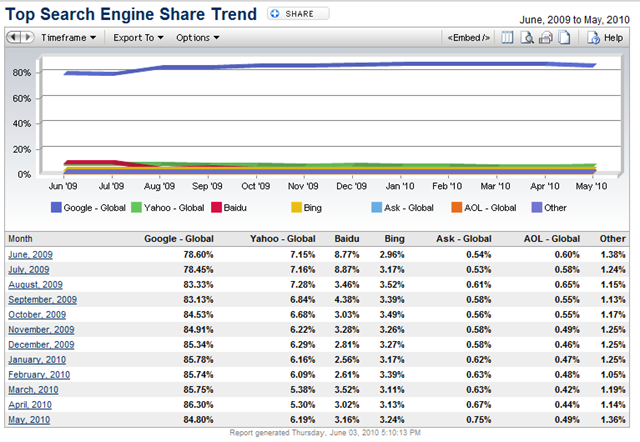 One of Microsoft's biggest sellers, aside from its operating system, is Microsoft Office.  They recently announced a deal with manufactures to offer a trial period of Microsoft Office 2010 on new computers for $2 per copy with a Bing bar installed on their machine, compared to $5 per copy, without.

Mobile
Bing is not only targeting the desktop market, but the mobile market as well.  The Bing app is available on multiple mobile phones, including the iPhone (in the US), and will be tightly integrated into Windows Phone 7 when it arrives later this year.

The Bing app is only for select Windows Mobile 6.x phones are include a turn-by-turn navigation, for free, offering a complete navigation on your phone.  The Bing application offers users a free GPS unit, available for Sprint, T-Mobile and AT&T customers.