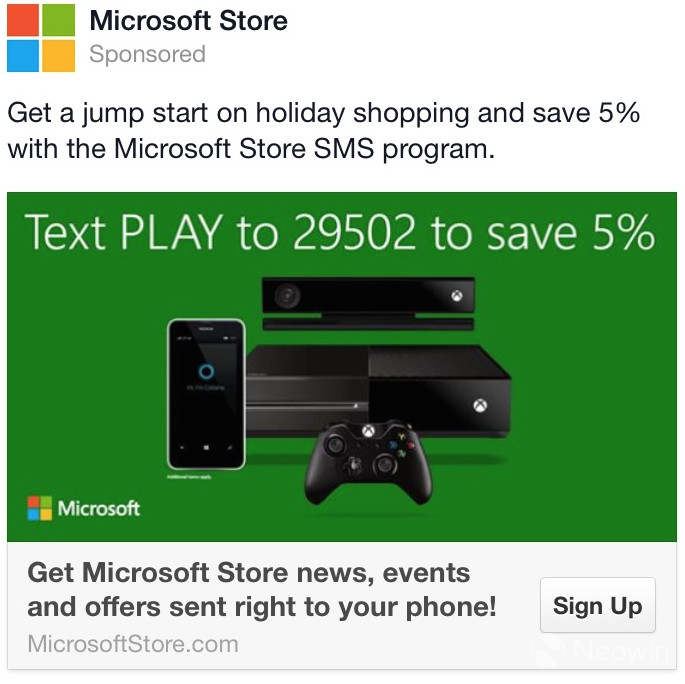 Earlier today, Microsoft announced that they would be offering up the Xbox One for $350 this holiday shopping season; a nice price cut of $50, and that includes a free game too. But what if you wanted to save even more pennies? Well, if you don't mind a very small amount of legwork, you can save an additional 5%.

Here's the deal: if you sign up for Microsoft's text message alerts, they will give you a coupon code worth 5% off at a Microsoft Store. So, by combining the $50 price drop with the additional 5% off, you can buy an Xbox One for $332.50 starting next month. The easiest way to get the 5% off code is to text 'Play' to 29502.

We checked the terms and conditions on the promotion page to see if there were any exclusions and it's about as clear as mud. If you click the terms and conditions link, it takes you to a PDF for a phone giveaway from 2013. If you scroll to the bottom of the page, it says that this promotion is not active until 12/16/2014 and that the Surface Pro 3 is not part of the offer.

We texted 29502 and instantly got a 5% off coupon that works for an Xbox One, but this alert was shown at the top of the page when we were testing to see if the coupon would work with an Xbox One.

The promotion does not mention anything about limited quantities of the Xbox One for this deal and seeing that the coupon was applied correctly means that this deal is active, despite what the legal footer says on the promotional page. The promotion at the top of the page mentions that this coupon is good for the holiday shopping season, so it should work next week when the $50 price cut goes live.

If you are in the market for an Xbox One, it looks like combining the upcoming price drop with the coupon by texting the phone number above is the best way to buy an Xbox One.