Are you in the market for a new laptop? You're in the right place. I've been using the HP Pavilion x360 m3 Convertible for about a month and a half now, and to be honest, I've enjoyed almost every bit of it.

As I always do when reviewing a laptop, I'm writing this review on the Pavilion x360. As a blogger, keyboard quality is very important to me, so if I can write a full review on it without any problems, the machine passes the test. Huawei's MateBook was an example of one with a keyboard that didn't do quite so well.

Of course, this has been my fulltime laptop for some time now, so I'm pretty familiar with it and I'm confident that it can deliver. Let's dive right in.

The only thing that might leave you wanting more from these specs is the storage. 128GB is certainly not a lot, but you can get by just fine if you're comfortable with cloud storage. If you're the type of person that likes to locally store tons of video files, you might want to check out something with more storage.

While it's only 128GB, it's still fast because it's an SSD. Solid state drives are much faster than hard disk drives (HDDs), so you're basically sacrificing space for speed.

The issue of third-party software on PCs is a big one, and it's the one issue that I had with the Pavilion x360; luckily, there's a workaround that I'll get into in the next section. Here's what comes pre-installed on the laptop, including HP's own software:

Note that Amazon being listed twice isn't a typo. The app comes pre-installed, but the website is pinned to the taskbar. The pin shouldn't be considered software, but it's worth mentioning. It's also worth mentioning that not all of it comes from HP, as Microsoft pre-loads some Windows apps now, such as Solitaire Collection.

Put simply, some of it is useful and some of it is not. The Dropbox app will get you a 25GB bonus in your account, which is nice. HP Support Assistant isn't only useful, but it's important. That's where your drivers are updated, as well as third-party software.

McAfee is software that I don't recommend installing or using on anything. Unfortunately, you're going to see annoying pop-ups from it from time to time, even if you never opt into it. The other apps are pretty much dormant until you use them.

Luckily, the laptop contains a license for Windows 10 Home, and it doesn't have to be HP's version that you get from the HP Recovery Manager. You can download a stock version of Windows 10 from Microsoft and use that instead.

Ultimately, the third-party software wasn't a dealbreaker for me. I still found the laptop to be a pleasant experience with it, but I enjoyed it even more once I installed a clean version of Windows.

The design and form factor

The HP Pavilion x360 is sleek and sexy. There's no doubt about that. The champagne-colored - called Modern Gold - metal body makes it pleasing to look at and it feels premium.

As with all of HP's x360 devices, you can easily fold the monitor all the way back. This convertible design gives it a sort of tablet feel, but unfortunately there is no pen support. Of course, your options aren't only laptop and tablet. You can bend the monitor into any position you want, such as setting it up in a tent position that will allow you to stand it up while you watch movies. 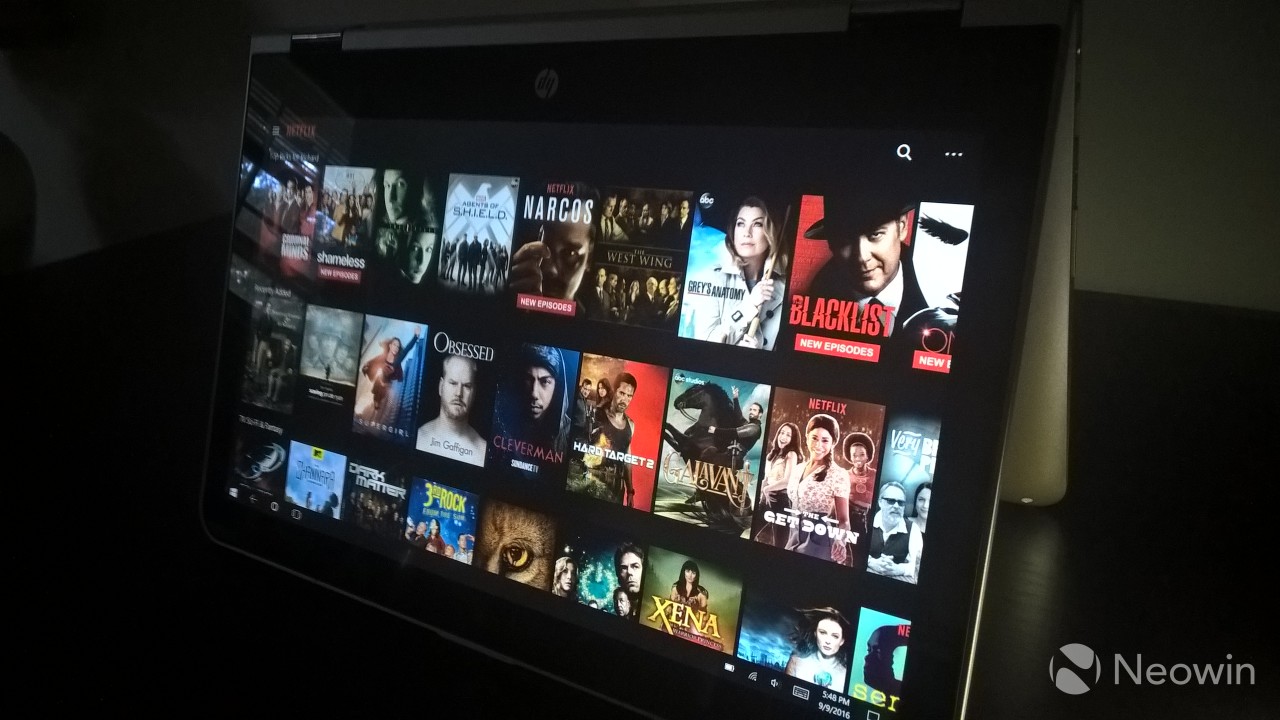 The gold keyboard is a nice touch as well. As I mentioned, I'm writing this review on that keyboard. To be fair, I knew it would go well going into it, as I've been using this machine to write articles for weeks.

But it's not just a good-looking keyboard. It's also comfortable to type on. It doesn't feel cheap, as you might get with some laptops in this price range. To put it simply, it's one of the better keyboards that I've used.

The trackpad is elegantly designed, as is the rest of the machine, but unfortunately it doesn't function as well as the keyboard does. It's simply not very sensitive, and it won't move the pointer as far as you'd like. There is a whole menu of settings to adjust things like this and I spent a significant amount of time trying to find a configuration that was comfortable.

I did find that using two fingers to scroll was the one thing that worked reasonably well. Unfortunately, multiple finger gestures did not. If you use the Pavilion x360, make sure that you're comfortable with primarily using a mouse.

I'm a bit spoiled when it comes to displays, as I use a Surface Pro 3 to do most of my work. The 1080p display on the Pavilion x360 is undoubtedly a step down from the Pro 3, but it's definitely great for the price.

It's certainly not what Apple would define as Retina, as you can easily see pixellation. Luckily, it's not enough that everything seems oversized.

Full HD is a fine resolution for a 13.3-inch display, even if I do have a bit of a bias here. It's certainly enough to do your work on, as well as edit images and video.

The touchscreen comes in handy as well. Windows Ink arrived with the Anniversary Update, and while there is no active pen support, you can use regular styluses or even your finger to draw in the Ink Workspace. These features come in particularly handy when you bend the screen all the way back.

I've mentioned that you can fold the monitor back to use the laptop as a tablet before, and I'll talk about it more when we get to performance, but it really deserves its own section.

The ability to quickly turn a laptop into a tablet form factor is extremely useful. The device is much heavier than, say, an iPad Air 2, or even a Surface Pro 4 or MateBook, so it's not going to serve as your primary tablet. In other words, don't expect to do all of your Kindle reading on this. 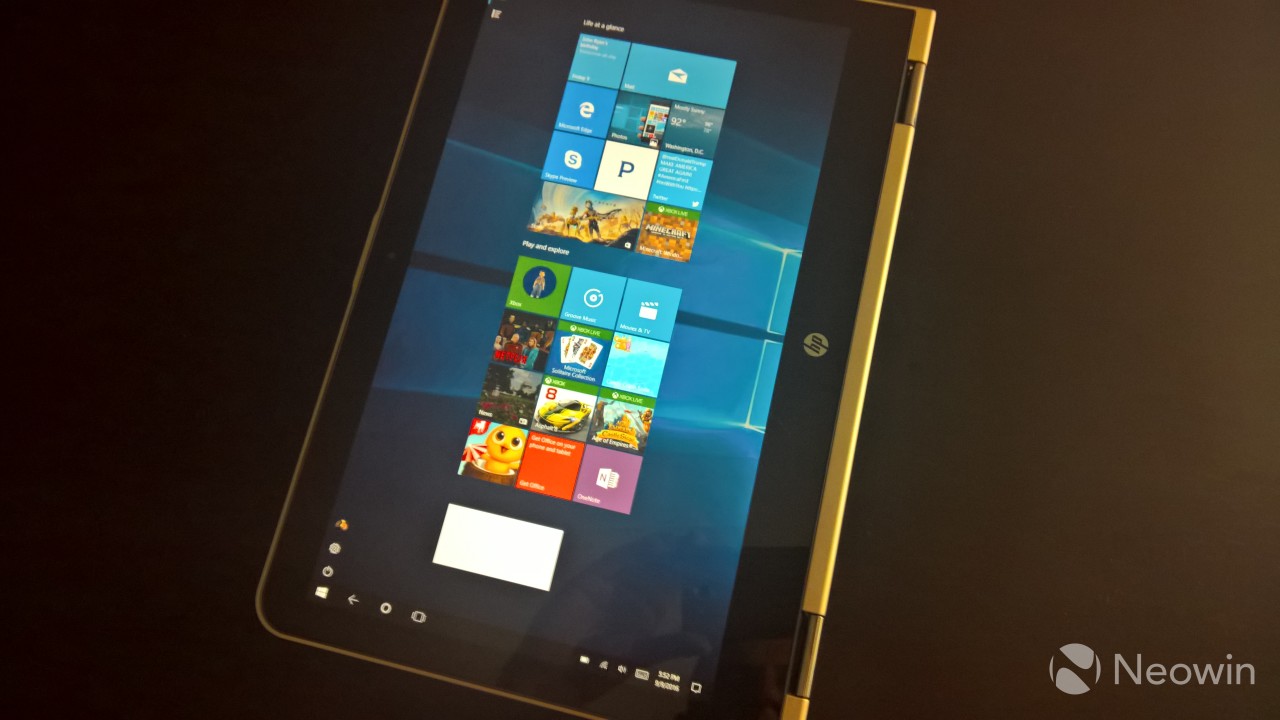 It's great, however, if you want to fold back your laptop and play a quick game of Halo: Spartan Assault or something else. My opinion on this feature, just like on Windows touchscreens in general is that it's not something you'll use all the time, but it's great to have when you do want it.

Of course, you certainly could read your Kindle books on the Pavilion x360. As you may have noticed from the images, the display will orient to any position you put it in. 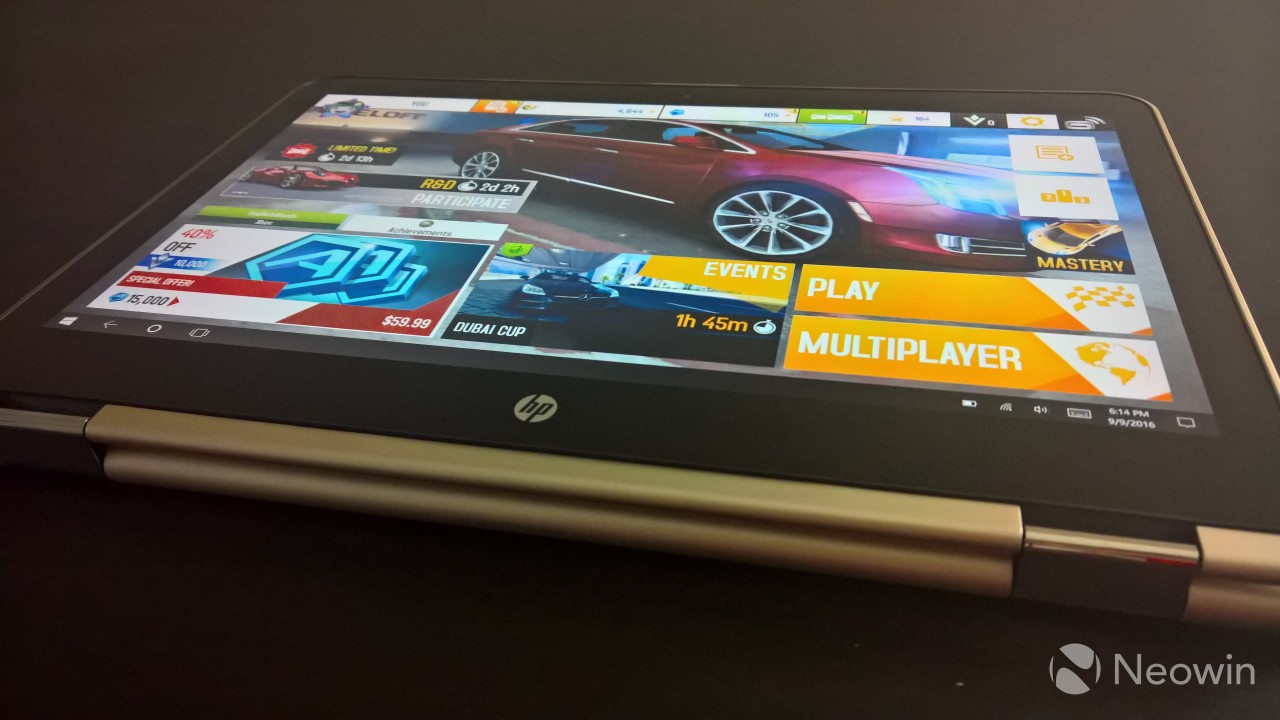 The HP Pavilion x360 uses Bang & Olufsen audio, so it sounds great. That's really all you need to know. I used it for watching movies and listening to music, podcasts, and audiobooks. It sounds really great, and you probably won't find yourself wanting external speakers.

Let's face it. When you buy a laptop, the speakers on it aren't what you'd call "great", or even "halfway decent". When we talked about the form factor, I mentioned putting the device in a tent position to set it up for watching movies, and the Pavilion will product adequate volume to do so.

Keep in mind, however, that the speakers are above the keyboard. When you fold the monitor back in any way, the speakers are now facing away from you. I didn't find this to be a problem, but if you're watching something, the further away from it that you are, the more this might cause an issue for you.

Ultimately, the speakers were one of my favorite parts of the Pavilion x360, as I often end up plugging in headphones on a laptop, but I didn't have to do that with this device. I never found myself wanting more volume than it could produce, which is a rare quality in a laptop.

The listing for the device promises eight hours of battery life. I found that to be a bit generous, but not by much. In fairness, just about any Windows PC that you buy exaggerates the battery life that it's going to get, or at leasts tests them under optimal conditions.

I didn't have any problems squeezing six hours of life out of the Pavilion x360, and most of the time I could get more than that. Keep in mind that I normally use the Chrome browser (which uses more battery than Edge) and while most of the time I'm browsing the web and writing articles, at times I'm compiling apps in Visual Studio or editing video.

Personally, I'd say the battery life on the Pavilion x360 is a win. 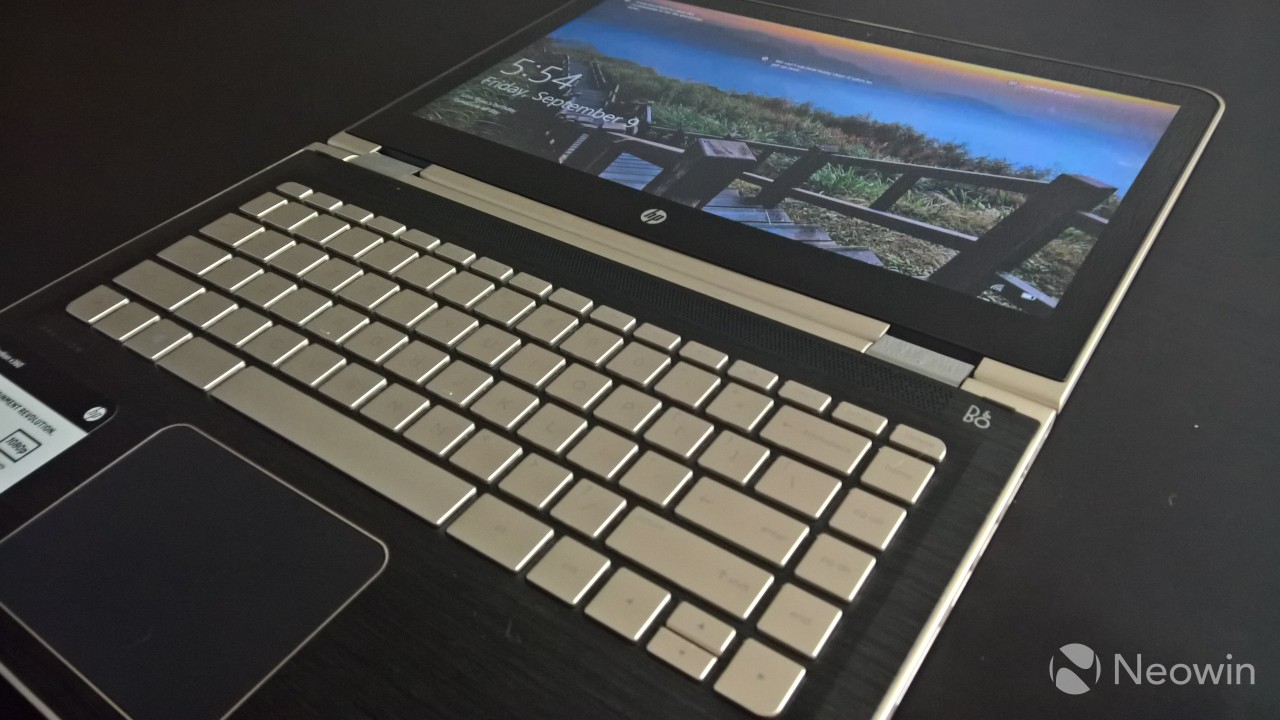 The Pavilion x360 does everything that you'd expect a Core i5 machine to do. Since I've begun using it, I've had no problems at all running Photoshop, as well as other apps from the Adobe Creative Cloud Suite. Running other heavier apps, such as Visual Studio and SQL Server was a pleasant experience as well.

I also tried out some of the games from the Windows Store. Touch-based games like Asphalt 8 and Halo: Spartan Strike run like a charm. Your arms might get a bit tired when using the Pavilion as a tablet, as it's a bit heavy to be one, but you do have the option to play those games.

Of course, I also ran benchmarks, for those that care about them. Personally, I recommend not putting any stock into benchmarks at all, as they rarely reflect real-world performance. I used Geekbench 4. 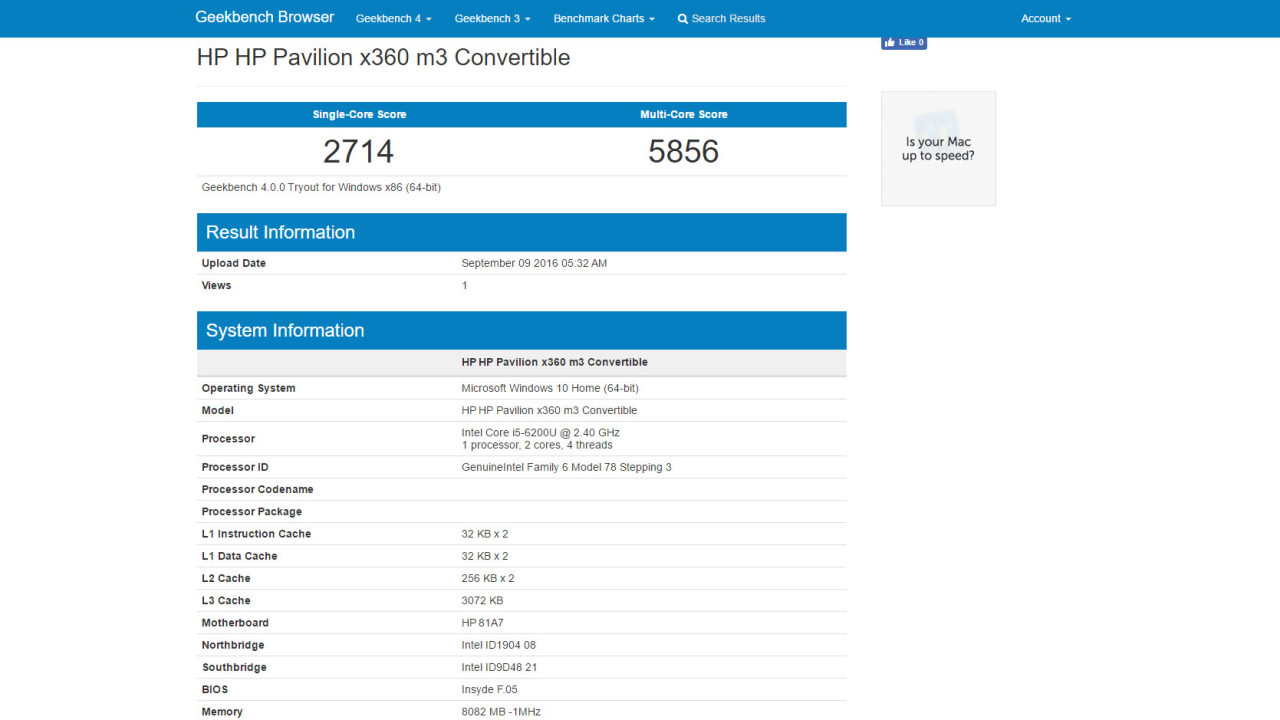 As you can see, the results are right around where you'd expect them to be for a dual-core Intel Core i5 processor.

Ultimately, the HP Pavilion x360 m3 Convertible is a buy. This assumes that you're looking to spend $729 on a laptop.

Of course, everyone has different needs when it comes to buying a new PC. If you're in the market for a gaming rig, it's not for you. If you're only looking to spend a few hundred dollars, this also isn't your machine.

This laptop hits the perfect spot for anyone that wants a solid machine but doesn't want to spend over $1,000 for one. I enjoyed my time with it, and I think you will too.