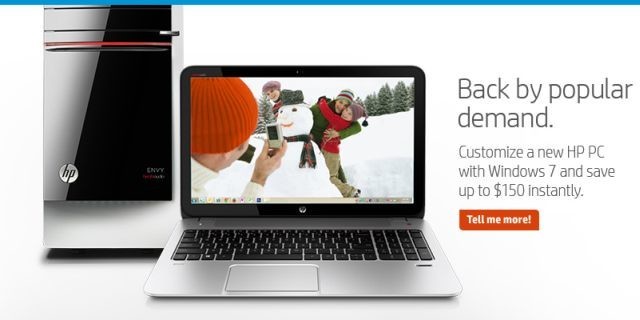 Last week, HP launched an online campaign to sell PC with Windows 7 installed, using the term "back by popular demand" to describe the promotion. While all major OEMs still sell new Windows 7 PCs, they are rather hard to find on their online storefronts and are traditionally targeting business customers. HP made waves because it was openly targeting Windows 7 PCs at consumers.

The move generated a lot of attention, with some speculating that HP was unhappy with sales of Windows 8 PCs and were trying to see if a more open sale of Windows 7 computers would be effective. This week, HP decided to respond to the speculation in a blog post, saying that the company simply wanted to give its customer a choice in products and operating systems. It added, "We like giving our customers the option to get the computer that’s right for them."

The blog points out that HP now sells PCs that run Windows 8, Windows 7 and even Android. However, the blog also said HP was committed to selling PCs with Microsoft's newest OS. It stated:

We want people to be happy with our computers – whichever option they choose – BUT WE ARE NOT DROPPING WINDOWS 8. Let me put this in perspective for you. All the five Windows 7 products we launched are available with Windows 8 as well. And in addition, we have several dozen more laptops and desktops that we only offer with Windows 8.

The company even threw in a final Vine video to emphasis the "choice" part of their blog but the post speaks for itself. What we will be curious to see is if other vendors start promoting Windows 7 on their landing page for consumer PCs.