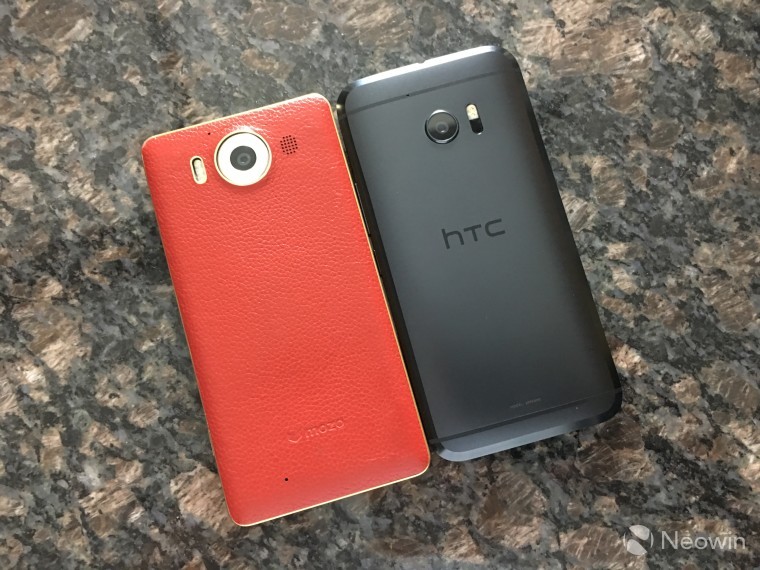 I've only had my hands on the HTC 10 for a few days, but it's already clear that the device is a winner. It follows the HTC One M9 in HTC's line of flagships, and the M9 had two clear problems: a terrible display and a weak camera.

The display on the 10 is clearly a massive improvement, but what about the camera? The firm's latest flagship uses laser focus, a larger sensor, and a large aperture. We can take pictures and look at them all we want, but the only way to know for sure is to compare it to the best, and if the Microsoft Lumia 950 is nothing else, it's certainly one of the best smartphone cameras on the market.

The HTC 10 isn't the first flagship handset to offer a lower camera resolution than its predecessor. Samsung did the same with its Galaxy S7. The fact is that there are pros and cons to a higher resolution. A higher resolution offers room for users to crop photos without losing quality; however, a lower resolution can mean larger pixels, offering a less noisy photo.

The Lumia 950 has a slightly smaller sensor size and aperture, but it also had a much higher resolution, which results in the smaller pixel size.

Larger pixels has been key to HTC's camera strategy since they introduced the 4 MP rear camera on the HTC One M7. Unfortunately, 4 MP simply wasn't enough. Zoom in on a 4 MP image and you'll see it rapidly degrade.

While HTC has produced a new take on ultrapixels with the 10, the Lumia line has long relied on Pureview technology, a combination of optical image stabilization (OIS), Carl Zeiss optics, and oversampling. Oversampling is the idea that a high resolution photo can be scaled down to a lower resolution photo, producing the best image. The higher resolution image would be saved for the event in which the user would want to crop the photo.

Of course, the HTC 10 offers RAW (DNG files) capture as well; however, to use the option, you must use the Pro mode. Like the Lumia, it will save both a JPEG and DNG file.

As we can see, the Lumia 950 clearly wins, for a number of reasons. Starting from the top, the colors are more accurate. Many of those purple flowers at the top are actually blue. I actually love this time of year because those are my favorite flowers to do camera tests with.

It's not uncommon for a smartphone to turn those flowers purple. The Lumia 950 did it in the center of the image, but you can see toward the edges of the images that the flowers are clearly blue.

Low light performance is also better on the Lumia. The nighttime shot proves that. It also handles bright lights better.

The HTC 10 also uses a method for a flash that's becoming more and more popular: the idea of lighting up the display. Sadly, at this point, it would appear that Microsoft is the last major player not to adopt the feature. With LG and Motorola among the first, Samsung, Apple, and now HTC have all adopted it.

You could probably make the case that the front camera is a draw, but the flash certainly puts the HTC 10 over the top.

Honestly, I find these results to be disappointing. For the last few days, I've truly been enjoying the HTC 10 and have high hopes for it. I suppose that it's my fault for hoping for the perfect phone.

Still, putting it up against the Lumia 950 is setting a pretty high bar. Either way, Microsoft's imaging technology still sits at the top of the ranks.