With each of Huawei's flagship series of devices - Mate and P - there's usually a standard and a Pro model. The Pro variant pushes the limits with new and trendy features; with the Mate 20 Pro, it's an in-display fingerprint sensor and depth sensors in the front camera. The standard model, on the other hand, maintains the status quo, so it often gets lost in the mix, overshadowed by its Pro sibling.

But that doesn't mean that it isn't an awesome device. In many ways, I like the Huawei Mate 20 even better than the Mate 20 Pro. I'll dig deeper into that later on, but in general, the Mate 20 is indeed awesome. It's got one of the best cameras around with its Leica-certified lenses, a beautiful LCD display, and a unique and elegant design.

As I mentioned earlier, the Mate 20 is the one that maintains the status quo, without radical design alterations. Mainly though, I'm talking about the fingerprint sensor that's placed on the rear of the device.

The Mate 20 has a glass back, even though it doesn't support wireless charging like its Pro sibling. What's really cool is that it has a textured back. Huawei sent me the Midnight Blue model, and the back is also textured for the Emerald Green one. Other colors are standard smooth glass. The texture is barely even noticeable when you touch it, but it creates a grip and makes it less slippery. 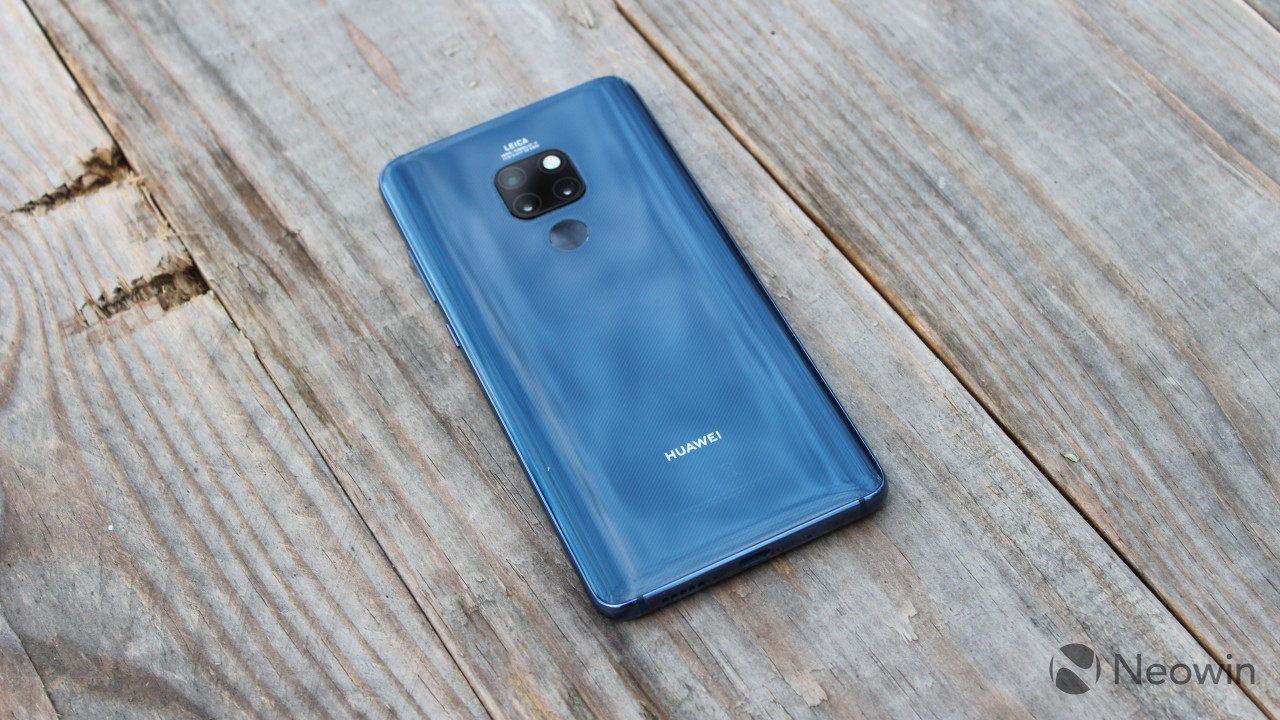 I also think it makes it more stylish, as there are diagonal lines running across the glass panel. So when purchasing a Mate 20, you'll have to decide between the stylishness of the textured back, or the stylishness of a gradient color like Twilight. It's not a bad problem to have.

I'm going to once again be critical of Huawei's choice to have a glass back and not include wireless charging. Wireless charging isn't possible with metal devices, and that's a key reason to switch to glass; however, glass is more breakable. At least with wireless charging, there's a benefit to the new physical vulnerability. Without wireless charging, you're just adding that vulnerability to make the device prettier. The Mate 20 Pro is the first flagship device from the firm to offer Qi charging, so I assume that we'll start seeing the feature in more devices. 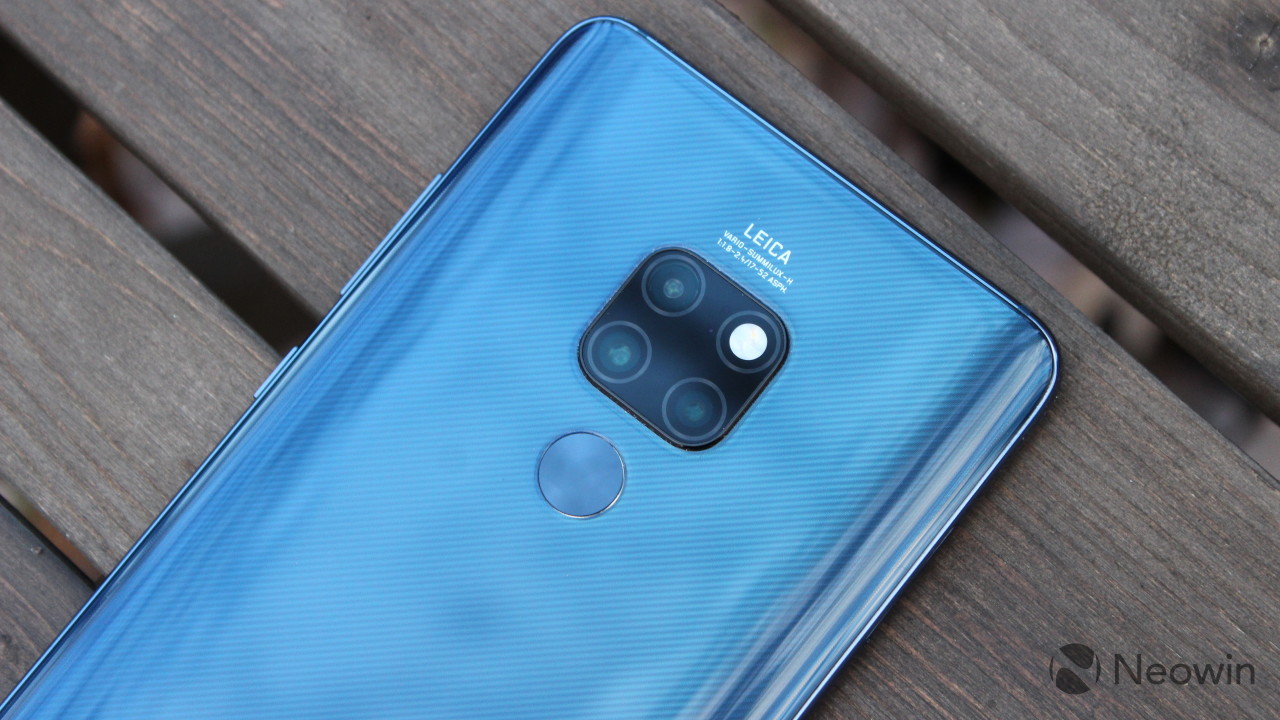 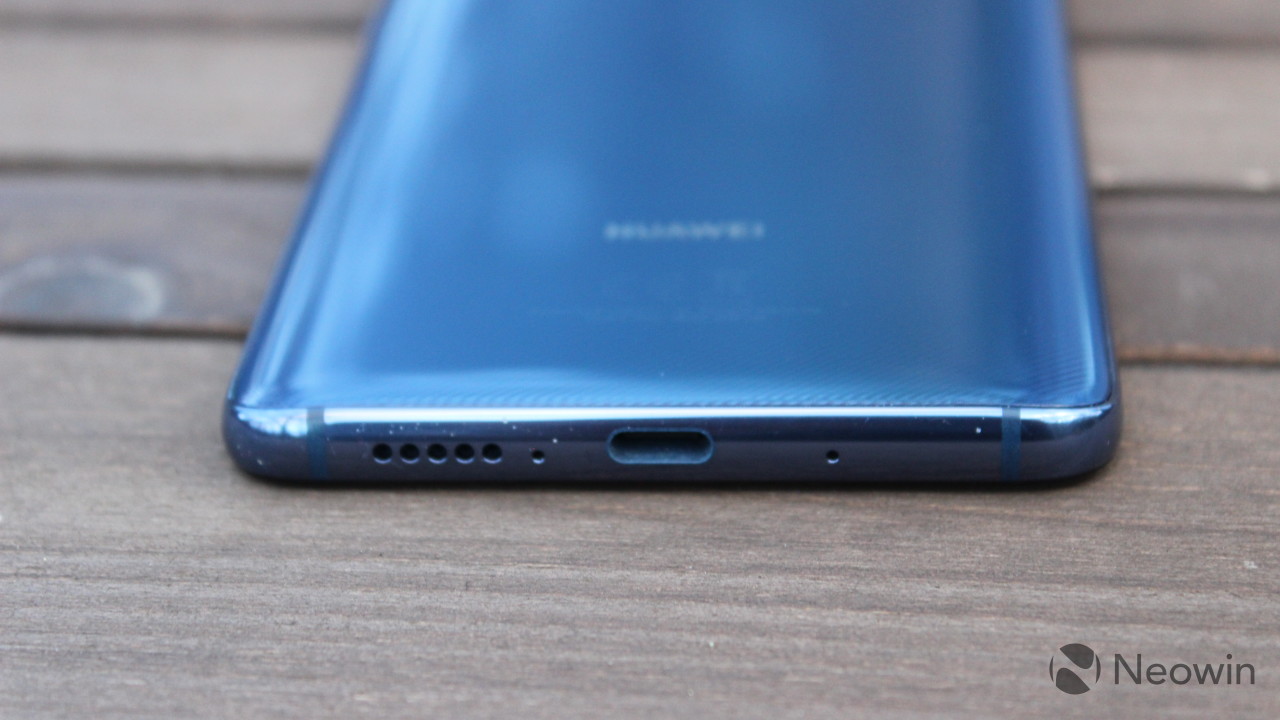 The device uses a metal frame, which does have a 3.5mm headphone jack, unlike Huawei's other premium devices. On the bottom, there's a USB Type-C port and a speaker grill, and while it's small, audio quality really isn't affected if you cover it with your finger. It just seems to boost sound coming from the speaker on the front of the device.

Update: A previous version of this article said that there was no 3.5mm headphone jack, but it's only the Mate 20 Pro that doesn't have one.

On the right side are the power button and volume rocker. On the left side, there's a dual-SIM slot, and the SIM 2 slot can be used for a microSD card. 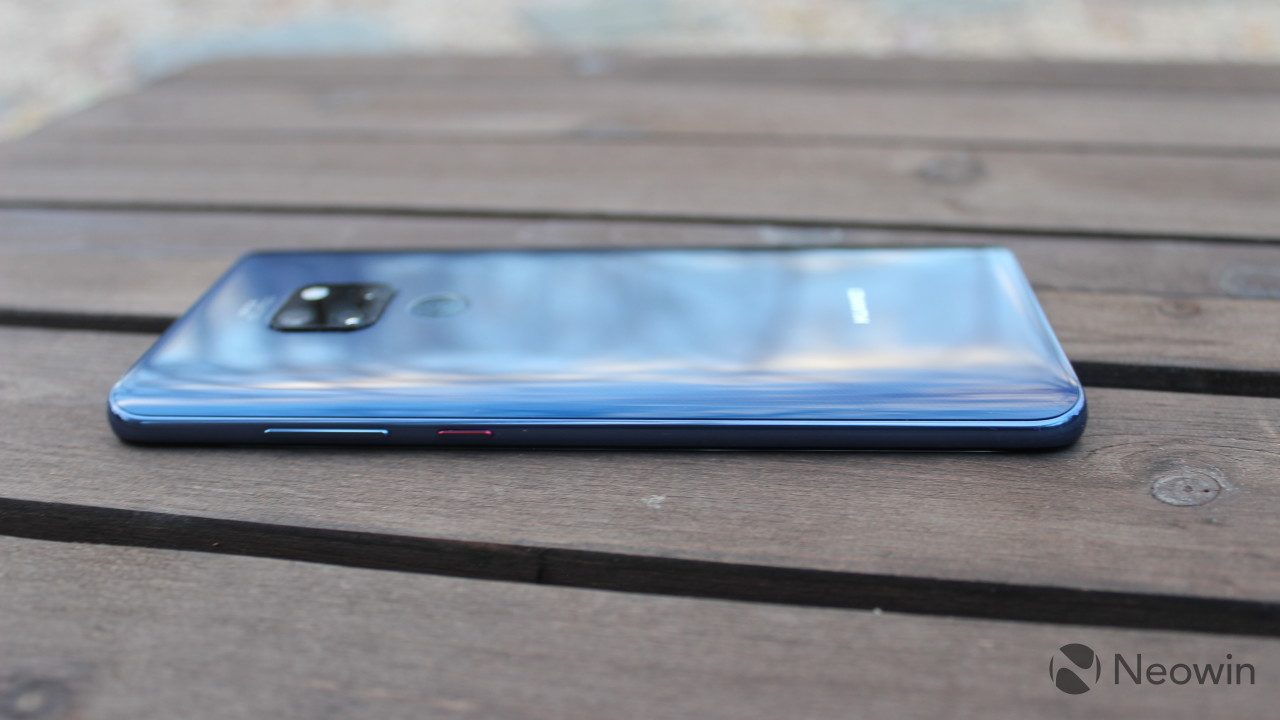 Finally, the front of the device includes a display that's nearly edge-to-edge. Unlike the Mate 20 Pro, the Mate 20 has a teardrop notch, which is a bit prettier than the larger notch on the Pro, since it's just a smaller notch. While the side bezels are very small, the top and bottom are slightly larger,although the difference is almost negligible. However, it's worth noting that the bezels are not uniform on all sides. 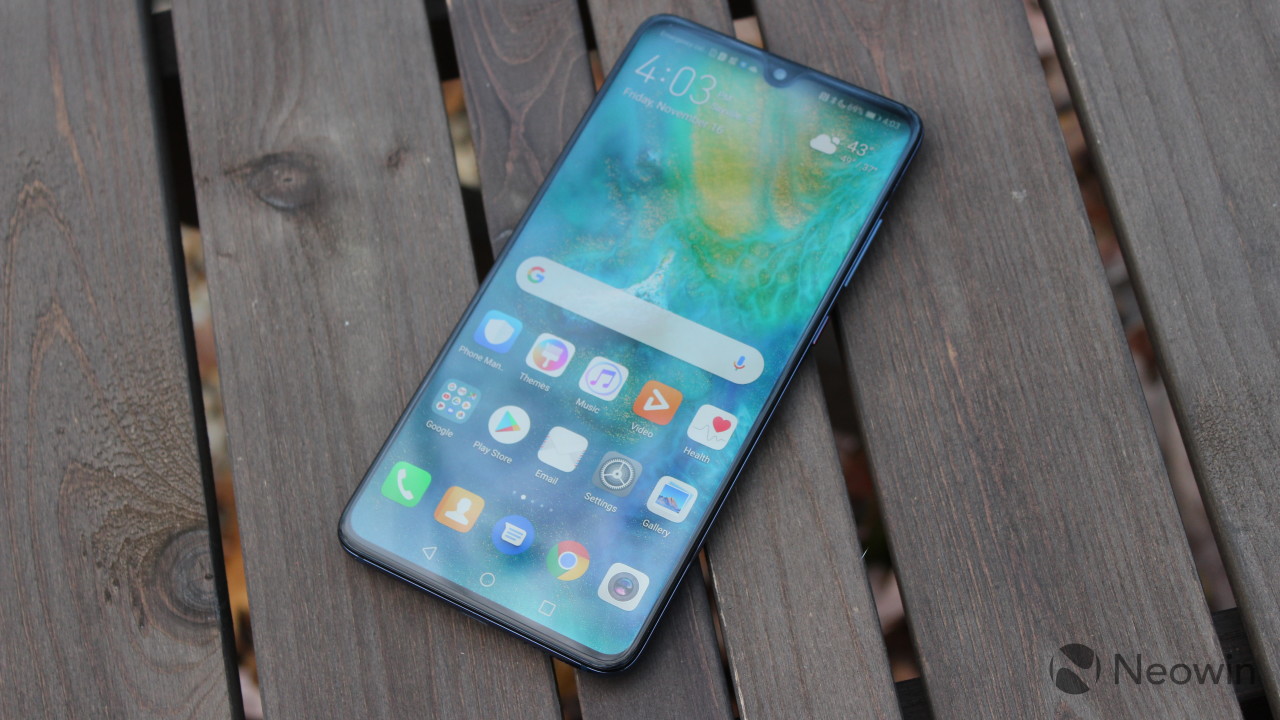 There are a few things that separate the Mate 20's display from the Pro. For one thing, the Pro is 1440p and 19.5:9, but the Pro also uses an AMOLED display, while the Mate 20 uses an LCD. LCDs, or liquid crystal displays, are entirely backlit, whereas with OLED displays, pixels can be turned off, allowing for true blacks. OLED panels also tend to have more vibrant colors, so they tend to be better.

But there are bad OLED displays and good LCDs, and this is one of the better LCDs that I've seen. In fact, if I told you that it was AMOLED, you probably wouldn't be able to tell the difference unless you put it side-by-side with the Mate 20 Pro. When the screen is black but still awake, you can barely tell where the screen ends and the bezels begin, which shows just how close to true black this phone gets. 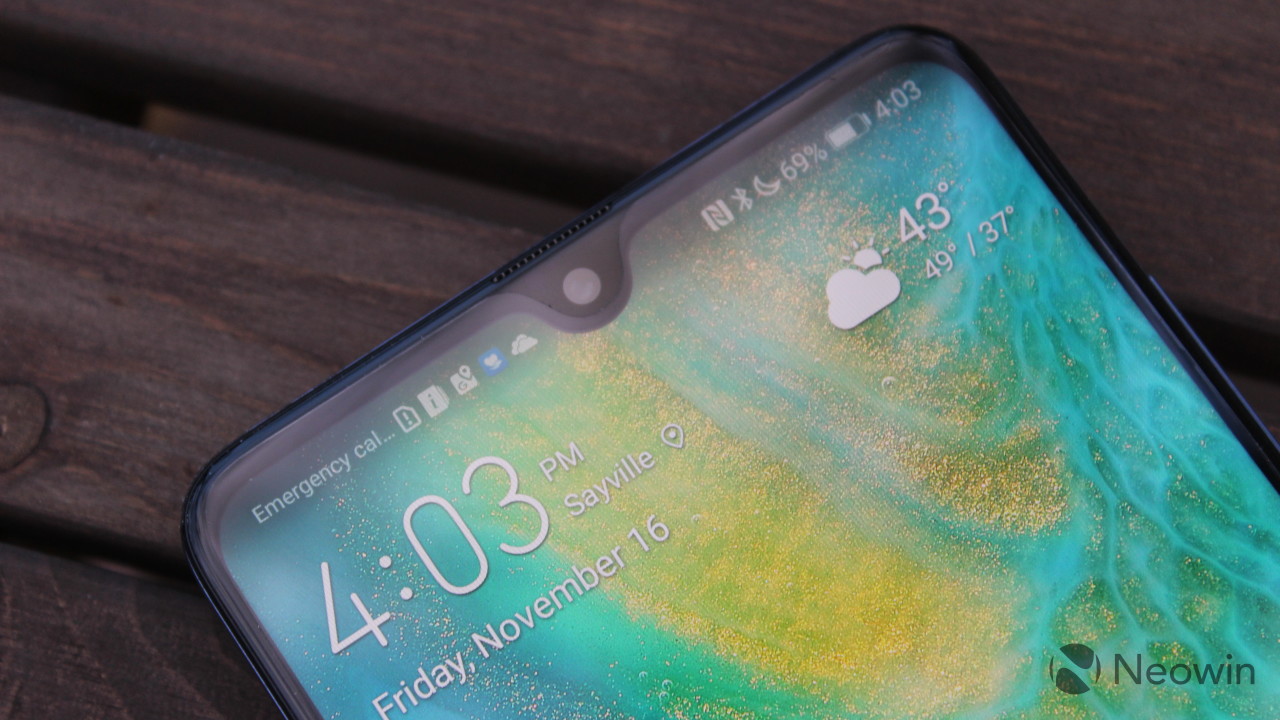 The other thing that's different about the display is the notch. The Mate 20 Pro has a wide notch, similar to an iPhone Xs, but the Mate 20 has a teardrop notch, which is smaller and much more discreet.

At the end of the day, the display on the Mate 20 is fantastic. You're not going to see the difference between 1080p and 1440p, and this is a high-quality LCD with accurate and vibrant colors.

You've heard about the camera on the Mate 20, right? No, of course you haven't. The Mate 20 Pro gets all the love, and without a doubt, the Pro deserves the attention it gets, with its 40-megapixel lens and the lossless zoom that comes as a result.

Unfortunately, this does a disservice to the Mate 20, which still has a phenomenal camera. The standard RGB lens is only 12 megapixels though, which means that you don't get that lossless zoom. There is an eight-megapixel telephoto lens though, so you do get an optical zoom, but you can't go beyond that 2x zoom without losing quality.

Personally, I like this combination. For a few years now, dual-lens cameras have been shipping, but the secondary lens doesn't always have the same functionality. Samsung and Apple use 2x zoom lenses, while LG always used wide-angle. With triple-lens configurations, you don't have to choose anymore. It was the same case with the new LG V40 ThinQ.

Now, let's talk about some of the camera features. Huawei's headlining feature is the AI camera, which surprisingly enough was turned off by default on both of my review units (Mate 20 and Mate 20 Pro). This makes use of the dedicated Neural Processing Unit in the Kirin 980 chipset to decide what it's looking at and adjust the settings accordingly. The different presets include things like blue skies, greenery, food, people (portrait mode), night, dogs, cats, and more. Sadly, it did not recognize K-9 as a dog, which is frankly discrimination against robots.

In general, I actually like the feature (a lot of my colleagues do not), but there are aspects of it that I don't like. For example, it's really annoying when it tries to automatically switch to portrait mode when you don't want it to. You can easily clear out the automatic setting though and go to default, but sometimes it just tries to turn itself back on. The other setting that's annoying when you don't want it is night mode.

Before I go into that though, let's talk about night mode, which is one of the greatest camera features I've ever seen. It's so good that companies like Google are imitating it with Night Sight. Basically, it keeps the shutter open to allow more light for up to four seconds, but it's stabilized so it doesn't show up as a photo with a long shutter speed. It just brightens the image.

Night mode isn't just for nighttime either. It also works when a light source is behind a subject, so the subject is showing as dark. Night mode will brighten the subject right up.

Like portrait mode, night mode is a dedicated section of the camera app, unless the AI camera tries to turn it on. The thing is that if you're not using it, it's probably because you don't want to. The good news is that night mode now works with the secondary and the tertiary lenses, something that wasn't the case with the P20 Pro. With that device, it was really frustrating when I'd try to take a photo with a 5x zoom, and it would try to switch to night mode, which only worked with a standard zoom.

One last feature I want to call out is aperture mode. This uses a wider aperture to create a more shallow depth of field. It's pretty much portrait mode but for things that are not people. Personally, I think it works even better.

This is meant to take big.LITTLE to another level. The idea behind big.LITTLE is to use big cores for the tasks that require more power, while there are less powerful, more efficient cores for tasks that don't need so much power. These smaller tasks can be things like syncing background notifications, so while that's happening, the CPU isn't using as much battery life.

The Kirin 980 actually has three levels of this though, which allows power to be optimized even further. On top of the CPU, there's a dedicated Neural Processing Unit (NPU). On top of the camera features mentioned above, the NPU also helps with battery life on the massive 4,000mAh battery. It's meant to learn how you use the device, and optimize accordingly.

Of course, none of this means anything to the end user. The truth is that this is a flagship smartphone, and it performs as such. While the Kirin 980 will benchmark higher than Qualcomm's Snapdragon 845, the real differentiating factor is the NPU, and the features that it enables across the board. 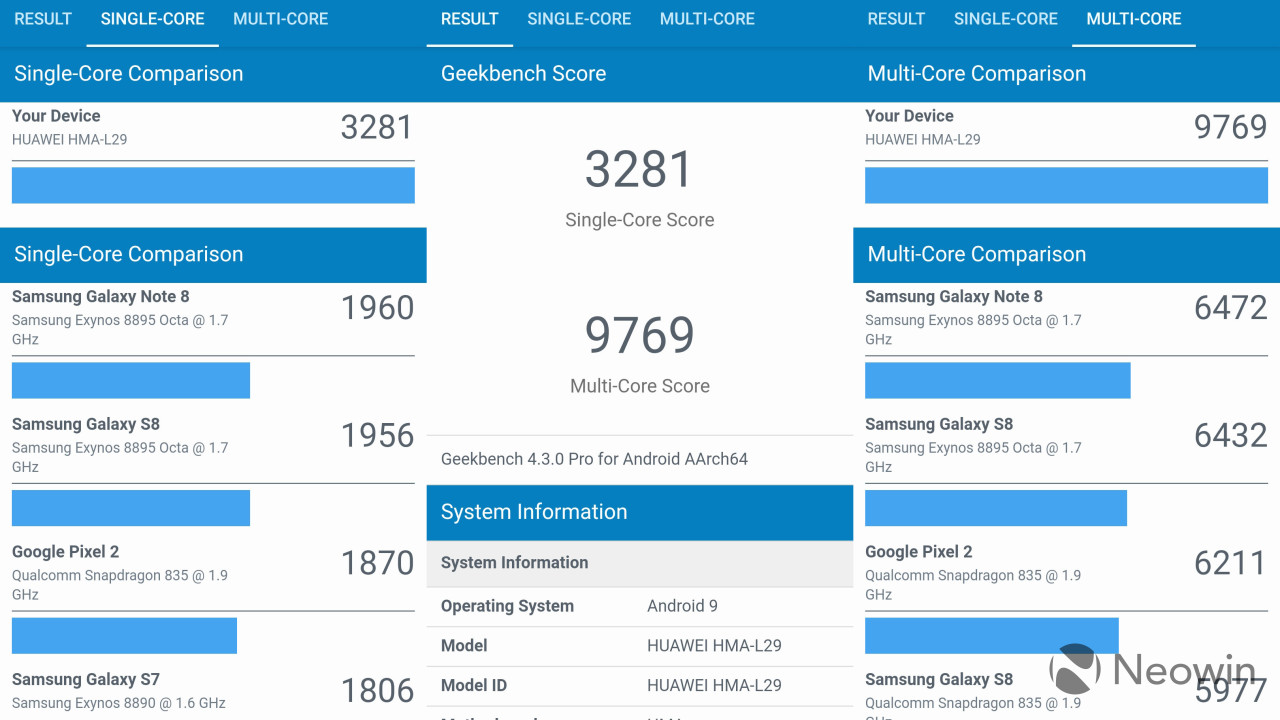 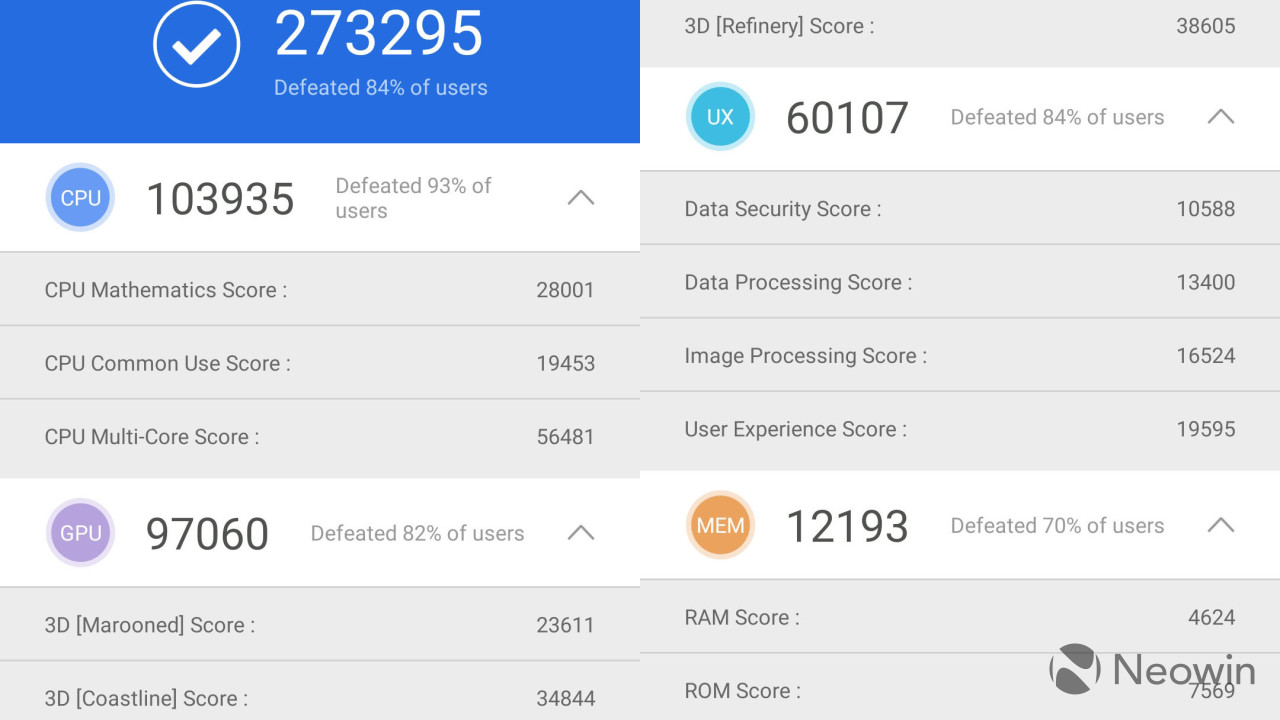 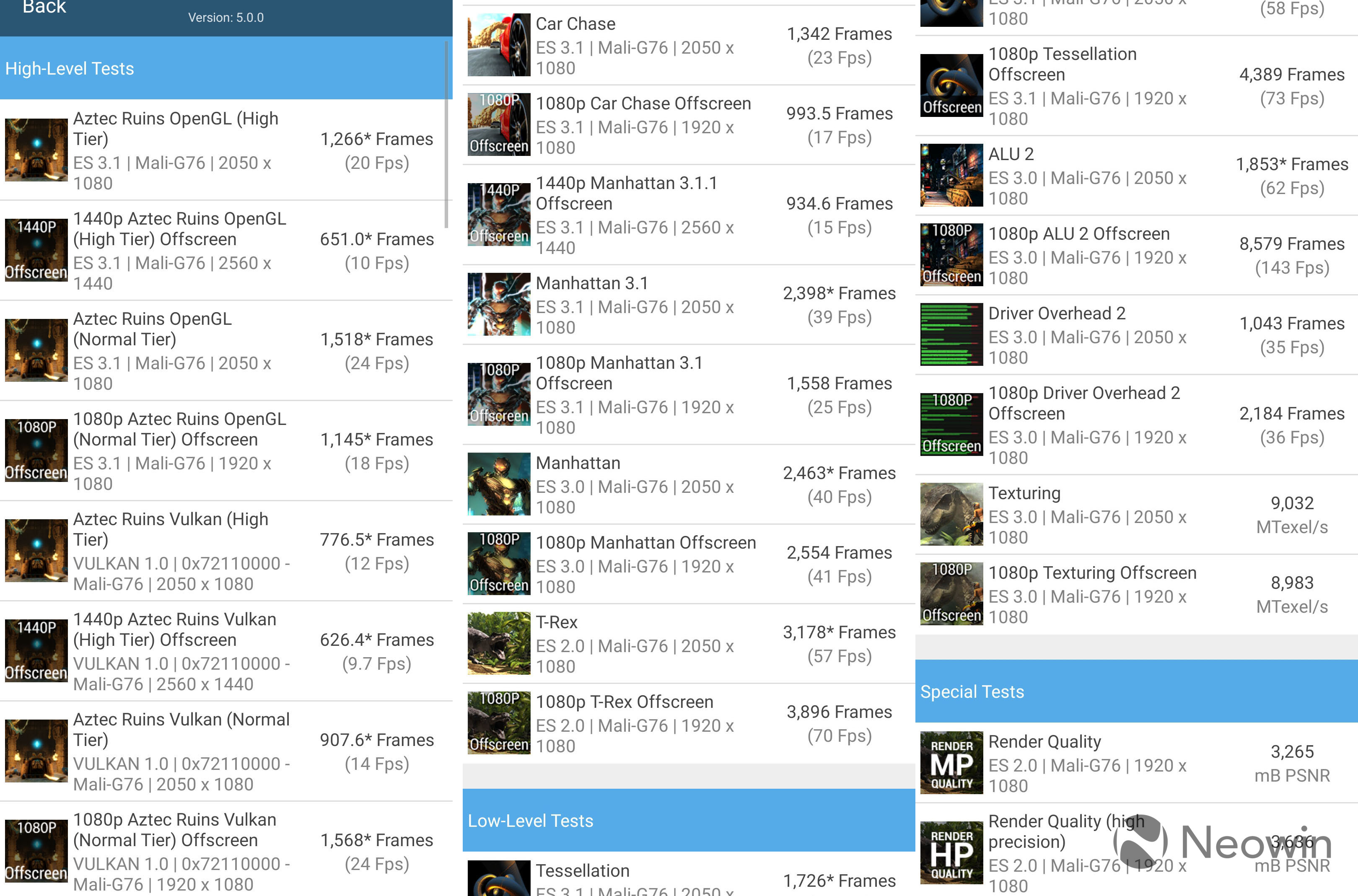 Huawei also has a GPU Turbo feature, to boost the performance of games. It supports titles like PUBG Mobile and Mobile Legends: Bang Bang.

To Pro or not to Pro 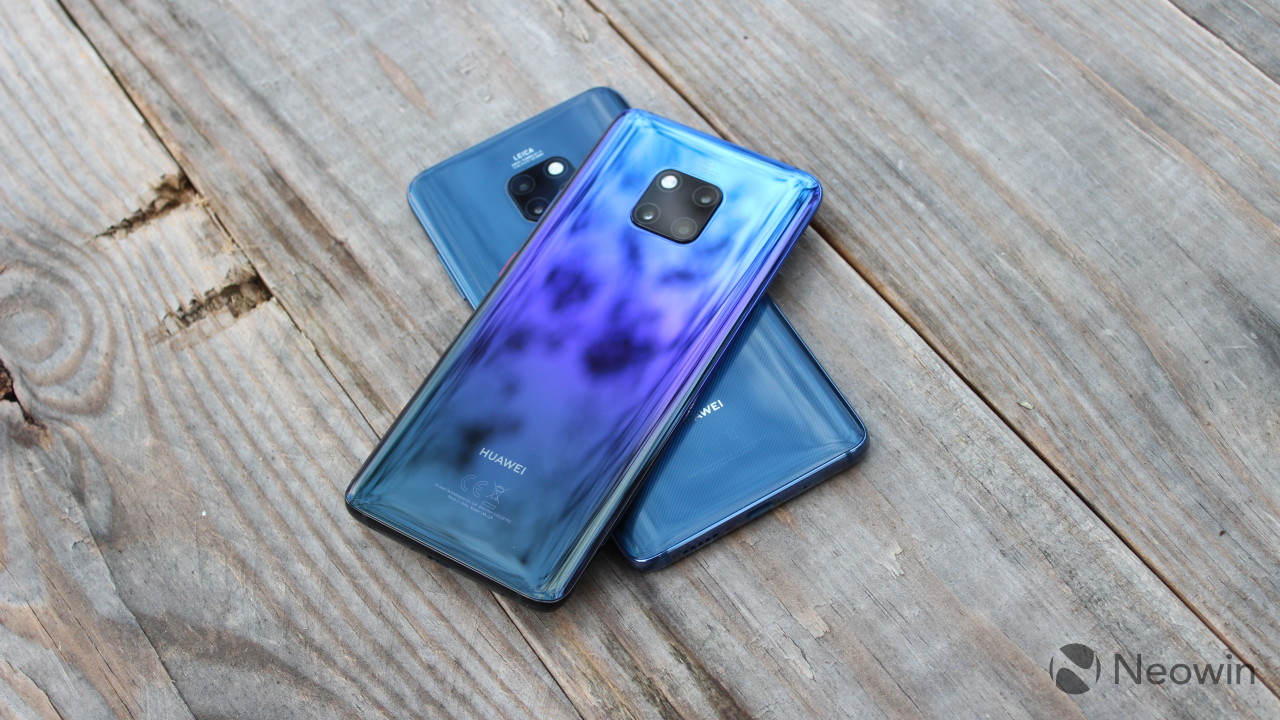 As I've mentioned a few times, there are quite a few differences between the Mate 20 and the Mate 20 Pro. Both devices are great, but the big difference is that the Pro pushes boundaries while the Mate 20 maintains the status quo. Here are the key differences:

Reviewing the Huawei Mate 20 really reminded me of when I reviewed the P20. The reason is because it's an awesome phone, but no one really notices it because it's overshadowed by a Pro version that's even more awesome.

At the end of the day, it's got a beautiful display, a wonderful camera, and great battery life. I also love the design, with its textured back. 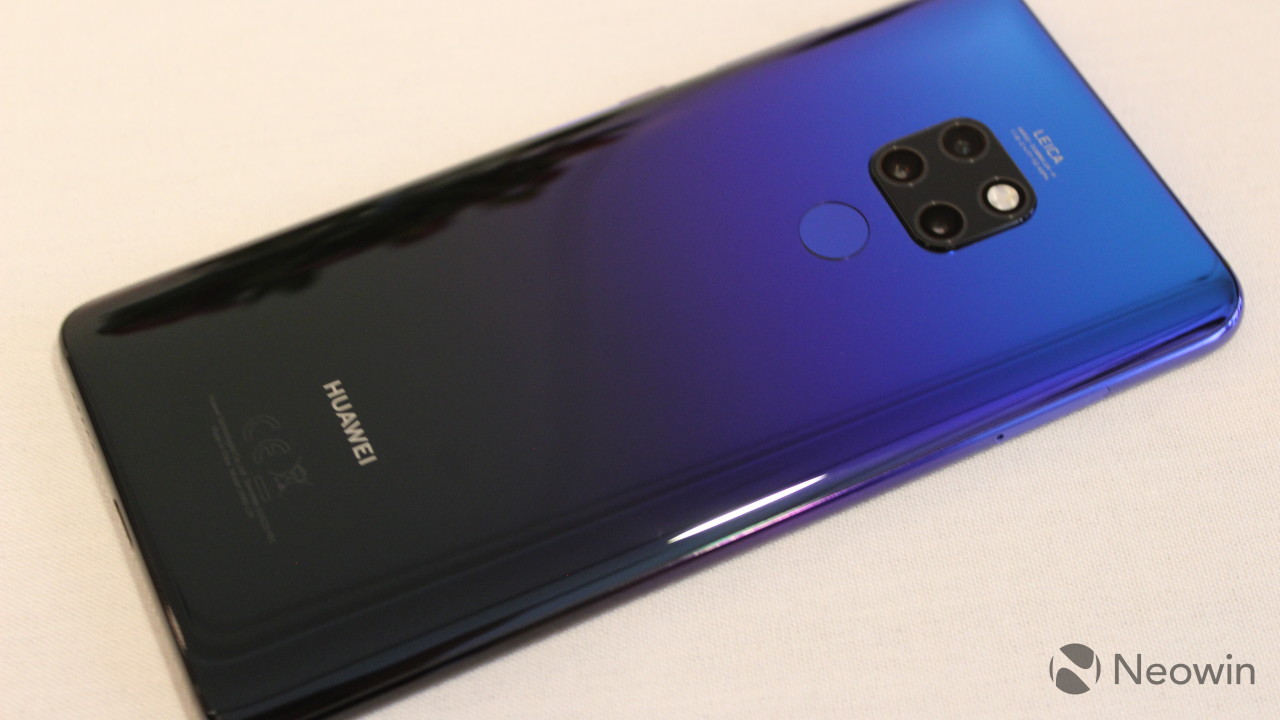 My biggest complaint overall is that you can't buy it in the U.S., unless you buy it on Amazon or something, but it's not optimized for U.S. LTE bands. This is really for reasons outside of Huawei's control; the U.S. government thinks that Huawei is spying on users and sending information back to the Chinese government.

But it's really a disservice to users, because Huawei makes an amazing product. When I got married over the summer and went on my honeymoon, I brought a P20 Pro with me, and I'm grateful that I did, because Huawei's Leica-certified cameras are so good that that's the camera I wanted to have with me. Every time I look at the pictures, I'm glad I had that phone with me.

And the Mate 20's camera is just as good, albeit without the lossless zoom features that come with a 40MP lens. You can get one on Amazon for $639.99, and I think you'll enjoy it.