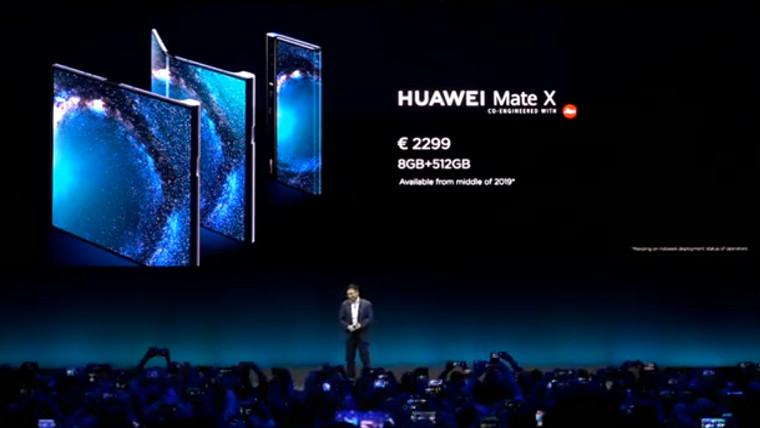 Foldable phones are stealing the limelight at this year's Mobile World Congress, and a few days after Samsung unveiled the Galaxy Fold, Huawei has formally taken the wraps off its own bet. The Chinese tech giant's foldable smartphone is the Mate X, just as expected.

The Mate X sports an 8-inch display when unfolded and its screen resolution is 2480x2200. However, the main display shrinks to 6.6 inches when folded, with a 2480x1148 resolution. Under a similar circumstance, the secondary (rear) display is reduced to 6.4 inches with a 2480x892 resolution. Both the main and rear screens can display the same thing so that you can share what you're looking at on the device with another person in front of you. Unlike the Galaxy Fold, though, the Mate X folds on the outside.

Because the phone is a bit large to hold, it has a dedicated grip on one side where all of the cameras are also located. Unfortunately, the phone's camera specs aren't known as of this time, though Huawei says it still has the Leica branding like its other flagship devices. Its power button doubles as a fingerprint sensor.

What the company revealed so far is that the Mate X will include support for a 5G network, thanks to its own Balong 5000 modem. It is also powered by Huawei's in-house Kirin 980 chipset paired with 8GB of RAM and 512GB of storage. The handset also packs a massive 4,500mAh battery with support for the new Huawei SuperCharge 55W version, which the firm claims can juice up the device up to 85% within half an hour.

The Mate X will be available beginning in mid-2019 for €2,299, though there's no word yet on its regional availability.