In December, Hulu announced that the number of people subscribed to its paid Hulu Plus service had exceeded the three million milestone. Today, the company announced that during the first quarter of 2013, it reached the four million subscriber mark. 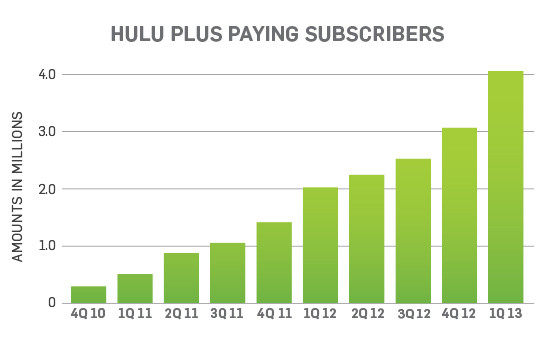 Hulu's blog announced the news today, along with word that 15 percent of its subscribers watch videos from Hulu from a mobile device. A Hulu Plus app was released for Windows 8 in October and there are apparently plans to add a Hulu Plus app for Windows Phone devices in the near future. The blog added that 29 percent of Hulu users watch from the living room, most likely from a set-top box, a smart TV or a game console like Microsoft's Xbox 360.

Last year, Hulu announced plans to launch a number of original or exclusive shows for its users. Today, two more original series were announced: Quick Draw, a half-hour Western comedy series that will premiere this summer, and East Los High, a teen-focused English language series but made with a all-Latino cast and crew.

Hulu is also the exclusive streaming video home for two former ABC daytime soap operas; All My Children and One Live to Live. The two soaps began running all new half-hour episodes on Hulu Monday and will run new episodes every weekday. The shows can also be bought and downloaded on iTunes).