Firstly, this year, IBM is planning on releasing Qiskit runtime—an execution environment that speeds up the execution of quantum circuits by as much as 100x. Qiskit runtime achieves this substantial speedup by reducing the latency in the communication between classical and quantum computers. By cutting this latency, workloads that take months to run today can be cut down to a matter of a few hours.

The Qiskit runtime rethinks the classical-quantum workload so that programs will be uploaded and executed on classical hardware located beside quantum hardware, slashing latencies emerging from communication between the user’s computer and the quantum processor.

One of the primary use cases of quantum computers is the simulation of quantum systems, which is an arduous task for classical computers since the computational complexity required to model a system grows exponentially with respect to its size. Today, a simulation of Lithium hydride (LiH) can take up to 100 days. But with the 100X speedup, this task can be done in one day.

Moreover, Qiskit runtime will be sizing up the capacity to run a greater variety of quantum circuits, allowing developers to run programs developed by others as a service in their own workloads and eventually tackling previously inaccessible problems with quantum computers. With help from the firm's OpenQASM3 assembly language, technologies designed on OpenShift, by 2023, IBM plans on debuting circuit libraries and advanced control systems for manipulating large qubit fabrics.

Cumulatively, IBM boldly claims that come 2023, its quantum systems will be powerful enough to explore major problems with a clear demonstratable advantage over classical computers. 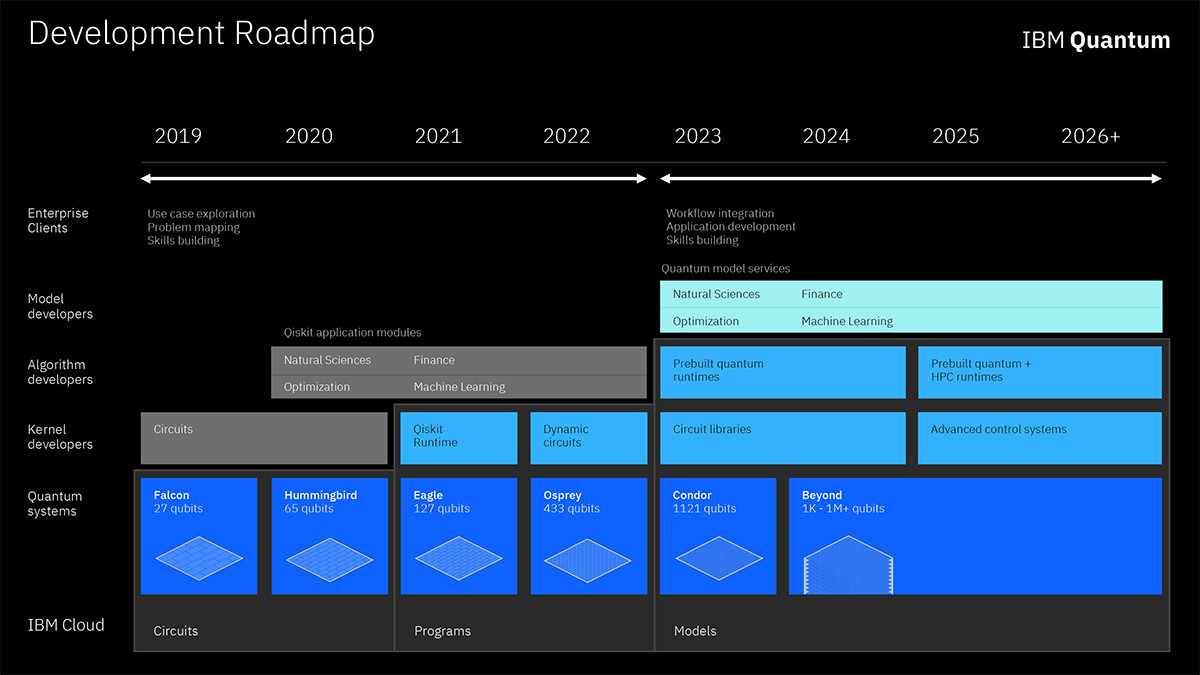 Come 2025, IBM is confident that it will achieve "frictionless quantum computing", a turning point at which the barrier to entry into quantum development will be greatly tamed.

By then, we envision that developers across all levels of the quantum computing stack will rely upon on our advanced hardware with a cloud-based API, working seamlessly with high performance computing resources to push the limits of computation overall—and include quantum computation as a natural component of their existing computation pipelines.

And a decade from now, in the 2030s, IBM hopes that our hardware and software prowess will reach the extent that we will be able to run billions and trillions of quantum circuits without even realizing that we are doing so. That would be the era of practical, full-scale commercial quantum computers.