The research firm IDC has been changing its predictions for how many new PCs will be shipped worldwide in 2013 more than once. In March, it predicted that overall, shipments would go down by just 1.3 percent compared to 2012. In May, it revised its estimates and said PC shipments would decline by 7.8 percent this year. 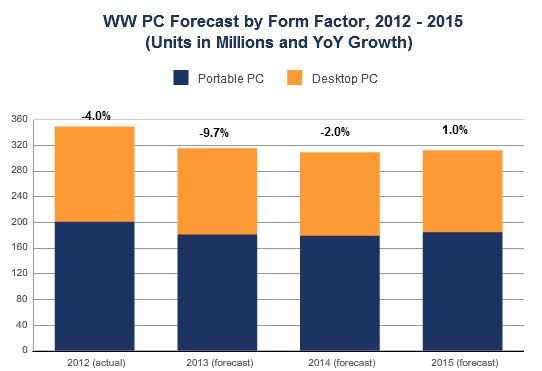 Today, IDC changed its predictions yet again, and it's not good news for the PC industry, not to mention Microsoft. The firm is now saying it expects PC shipments to total 134.4 million units in 2013, a 9.7 percent decline compared to 2012. IDC says there are a number of reasons for their newest change, including the continuing rise of tablet sales. It added:

The repercussions of a slowing China, anxiety over the possible tapering of the U.S. quantitative easing program, and weak intrinsic PC demand are among a litany of factors that have rippled across portions of other formerly strong-growth areas, leading emerging markets as a whole to see declines through at least 2014.

But what about the launch of Windows 8.1 on October 18th? While IDC says that Microsoft's next OS is "expected to address a number of well-documented concerns" in Windows 8, it won't be enough to slow the decline of PC shipments in 2013. The firm is predicting that PC shipments in 2014 will decline less than this year, and will experience a small rebound in 2015. It also believes that in two years, more consumers may start buying new PCs after holding off for several years and large businesses will look at Windows 8 and 8.1 more seriously.