We’ve all seen the huge adoption rate of smartphones in the last few years, but according to IDC this trend is about to end. The market research firm says annual smartphone sales growth will hit single digits by 2017.

In its latest report IDC takes a look at how the smartphone market is changing rapidly, and how this will impact most of current players. According to them, the high-end market has already become saturated. Last year more than a billion smartphones were shipped, representing 39% growth over 2012 but this trend is no longer sustainable.

Due to saturation we’re bound to see a sharp decline in annual growth starting with 2014. Estimated growth for this year will be only 19.3%, less than half compared to 2013. This downward trend will continue until at least 2018 when yearly growth will reportedly hit a low of 6.2%.

Not only that but the average retail price of smartphones will also start to drop as OEMs and carriers focus on the emerging markets. 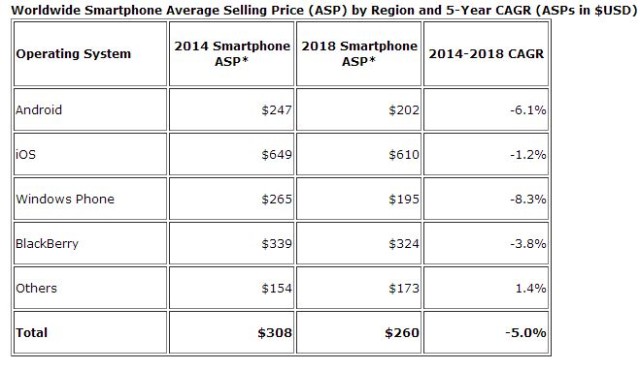 Industry watchers have long agreed that developing markets are the only ones that will drive growth in the long run, but these markets play by somewhat different rules. First up, “premium devices” will no longer be that important and the focus will shift towards low-end but capable handsets. We’ve already seen this with the success of the Lumia 520 as well as the prevalence of cheap Android handsets.

The average smartphone selling price (ASP) will also drop in the long run as companies compete in these markets. In 2013 ASP was $335 worldwide but that price is expected to drop to $260 by 2018. This will put some strain on OEMs and will lower the profit margins, creating an important entry barrier for new competitors.

As for which platforms will fare well in this brave new world there’s little to surprise us. Android is expected to account for the vast majority of smartphones out there, much as it does today. Lowering price points and having a wide reach will spell success for the open source OS. Whether this comes via Google or via OEMs forking AOSP will remain to be seen, but Android will nonetheless be the clear winner here. 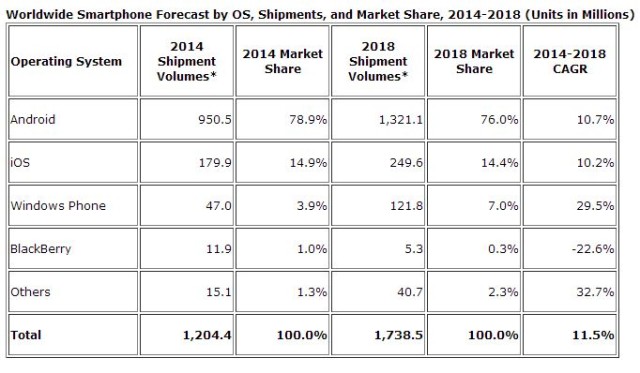 Despite recent downward trends, IDC suggests Apple will still be the clear number two player by 2018. The Cupertino company will most likely be the only one not competing in this low-end segment of the market; rather it will rely on its premium devices with high ASP and margins to offset its slowly declining marketshare.

Windows Phone is also seen as a strong contender in future emerging markets. With the recent announcements regarding lowering hardware requirements and cutting licensing costs, not to mention the addition of a new OEMs and ODMs as its partners, Microsoft’s OS will still be the fastest growing operating system. Despite all of this though, IDC predicts Windows Phone will still only account for 7% of the worldwide pie – admittedly a much larger pie than today.

Finally, Blackberry is viewed as having a negative outlook with its marketshare disappearing almost completely by 2018. The company will face increasing competition and aggressive price strategies from its competitors, even in highly specialized areas such as government communications infrastructures.

While this report is very straightforward it also doesn’t take into account the chance that a new revolutionary product might hits markets and restart the race once more. Of course this chance is slim but people thought the same thing back in ’07, before the launch of the iPhone.