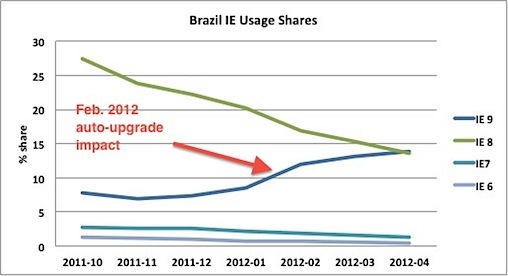 In December, Microsoft announced that it would begin automatic and silent updates to its Internet Explorer web browser for Windows XP, Vista and Windows 7 users starting in 2012. While that hasn't happened here in the US yet, Microsoft has enabled the feature in Australia and Brazil. Computerworld.com reports that there's evidence that IE 9's market share has gone up in those countries.

The information comes from StatCounter, which ironically is not considered by Microsoft to be an accurate way of determining web browser market share. Nevertheless, StatCounter's data shows that in IE9 use in Australia went up 23 percent in February and 42 percent higher in Brazil in the same month. Microsoft said that Windows Vista and Windows 7 users running IE 7 and IE 8 would automatically get a silent update to IE 9 in those territories.

Microsoft also announced that Windows XP users of IE 6 and IE 7 would get a silent update to IE 8. However, StatCounter's numbers in Australia and Brazil don't show much in the way of market share drops for those versions. So far. Microsoft has not given out any further information on when its silent update plans for Internet Explorer will be expanded to more countries.