Even though Microsoft's Internet Explorer and Mozilla's Firefox development teams technically compete with each other, each team occasionally takes time to celebrate the achievements the other team has made. Microsoft sometimes sends cake and cupcakes to Mozilla when a new version of Firefox is released, and the Firefox team sent Microsoft a cake to celebrate the launch of IE10 in October.

On Sunday, Mozilla celebrated a different achievement – the 15th anniversary of the formation of the company. Because the milestone happened on Easter Sunday, it took Microsoft a little longer to send Mozilla their 15th birthday cake. They posted an image of the cake on their Twitter page on Tuesday, admitting, "This one kinda snuck up on us. Had to improvise." 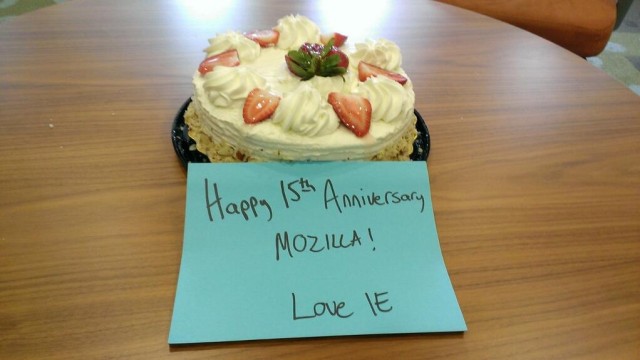 In Mozilla's official 15th anniversary blog, the chairman of the Mozilla Foundation, Mitchell Baker, offered her thoughts on the occasion:

In the coming era both the opportunities and threats to the Web are just as big as they were 15 years ago. As the role of data grows and device capabilities expand, the Internet will become an even more central part of our lives. The need for individuals to have some control over how this works and what we experience is fundamental. Mozilla can — and must — play a key role again. We have the vision, the products and the technology to do this. We know how to enable people to participate, both by contributing to our specific activities and coming up with their own ideas that advance the bigger cause of enriching the Web.

Source: IE on Twitter | Image via Microsoft
Via: Winbeta.org