Following on the heels of the launch of the Amazon Echo Show from Amazon today, new information has been leaked regarding Microsoft's answer to the Echo, with smart home and family oriented features built directly into Windows 10, potentially allowing you to use any PC as an Echo alternative.

In lieu of an official name from Microsoft, HomeHub, as referenced in coverage by The Verge, has been in the works for quite a while now but some leaked internal concepts show us a lot more detail for what Microsoft's end product will look like. They also provide further detail regarding the implementation of features we already knew about, such as the planned integration of some family-friendly features into the lock screen. 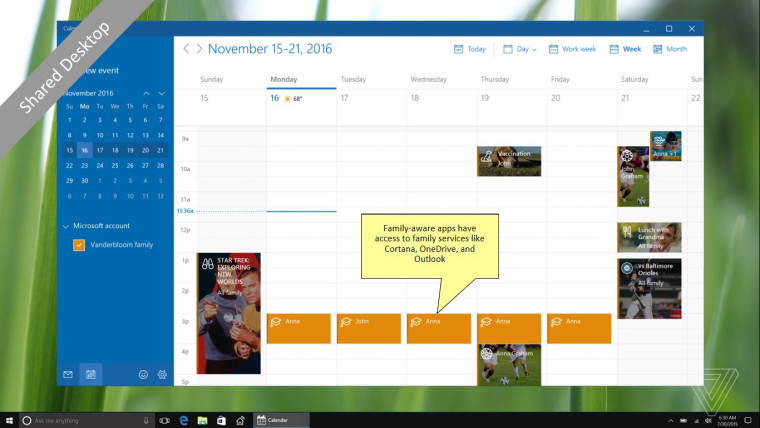 To start with, you will be able to control your smart home devices from within your Windows 10 device, with Microsoft looking to support the likes of Hue, Nest, Insteon, Wink, and SmartThings to offer a comprehensive list of devices. Also, as with the Echo, you will be able to issue voice commands to Cortana to control your smart home. Microsoft is also working with its OEM partners on both including these new features on their upcoming devices by default and possibly even refreshing existing PCs to avail these new features.

Microsoft's plans for HomeHub go beyond just the smart home, however, and the tech giant is looking to make Windows 10 family-friendly, too, with the addition of an always-on shared family home screen that can act as a notice board and more for the family. It can also show a shared calendar, to-do lists, notes, amongst other information. Cortana will also be able to distinguish between different users, allowing them to both share information on the family account and make their own personal queries.

HomeHub is expected to be released later this year in September, alongside the next major update to Windows 10, Redstone 3. With Microsoft's Build 2017 conference later this week and a large hardware event in Shanghai on May 23, we're likely to hear more about HomeHub from Microsoft this month.