Before Intel's Alder Lake-S got officially released, there were reports suggesting that Intel's new ATX12VO specification will be getting a bigger push from motherboard and PSU vendors. And although so far it hasn't quite turned out that way, there is finally a new ATX12VO specced motherboard that will be more of a budget offering than most of the existing _90 chipset premium boards that cater mostly to overclockers and enthusiasts.

This new board is the MSI PRO H610M 12VO and it was announced by the vendor during its weekly MSI Insider live stream on YouTube. MSI reiterated that ATX12VO motherboard and PSU adoption will likely remain low in the DIY PC market and as such, it only expects the new PRO H610M 12VO board to be limited to OEM/ODM and system integrator builds mostly. There is currently little to no detail on the feature-set provided in the new PRO H610M 12VO. 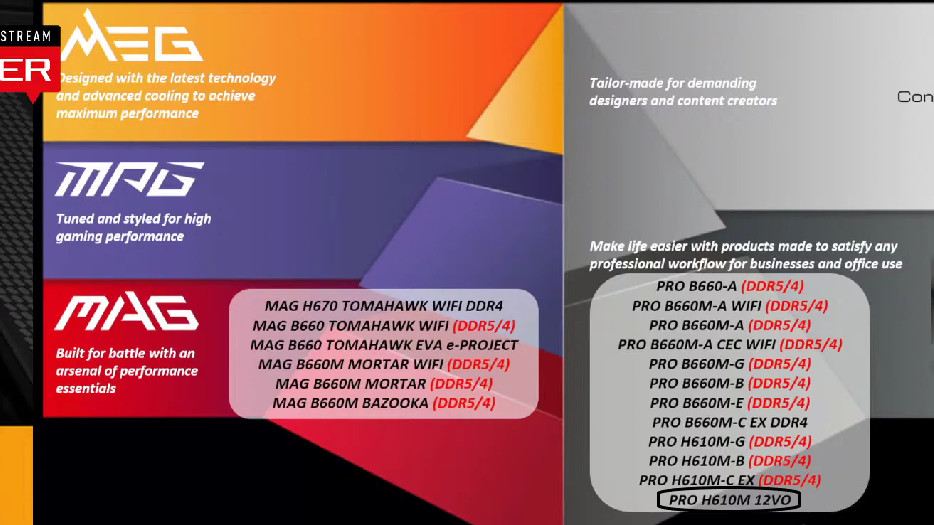 Alongside the 12VO option, MSI also has three other PRO H610M motherboards. There are also plenty of more expensive and feature-rich B660 and H670 boards too. The prices for the three other H610 variants excluding taxes are given in the image below.

The prices start at $99 for the cheapest option and go up to $115. Depending on the feature-set provided on the new PRO H610M 12VO, your mileage may vary, though it is expected to be more expensive as a lot of the voltage rails will be moved on to the motherboard itself.