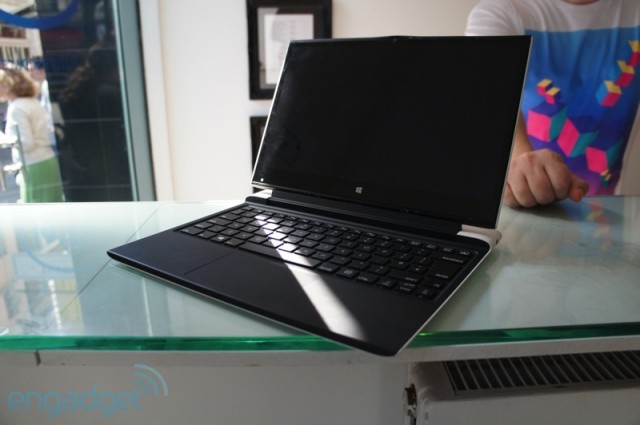 Intel's Haswell-powered "North Cape" reference design has appeared again outside of CES 2013, this time with Intel providing some more information on the design they hope OEMs will use as a model.

North Cape is a hybrid laptop/tablet reference design powered by a full, fourth-generation Intel Core processor (codenamed "Haswell"), as opposed to the upcoming Bay Trail Atom processors that will likely dominate the lower end of Intel-powered tablets. Alongside this powerful processor Intel has opted for a 13-inch 1080p display, which reduces down to a hand-friendly 11.6-inch display in tablet mode by rejecting your hands on the sides of the display.

Perhaps the most interesting bit of information to surface surrounding the North Cape design is that Intel expects the battery life to be around 10 hours of use in tablet mode, which is what can be seen already in low-powered ARM and some Atom tablets. This is despite the inclusion of a Haswell processor, which indicates that we should be seeing some decent life by the time Haswell eventually ships.

Intel has also reportedly designed a new docking mechanism for these sort of hybrid PCs, opting for a one-button electric latch that can be used single-handed. Often dockable tablets have difficult to operate latches when you want to pull it out of the keyboard, but Intel believes this new mechanism will alleviate some of the issues.

It's still not entirely clear when Intel will finally launch Haswell to the market, although the expectation is that OEMs will begin to sell Haswell devices in June sometime, following reports that chips are already shipping to some PC manufacturers.