Lining up with Nvidia's launch of new RTX-based laptops, Intel has formally introduced its new Core H-series processors today. As usual, these are 45W processors, and they're different from the H35 series Intel announced in January, though these can be configured down to 35W.

The new H-series processors are based on Intel's SuperFin 10nm process, and they include all the improvements of the Tiger Lake processors that are already available. This includes 20 PCIe 4.0 lanes for a total of up to 44 PCIe lanes (up to 24 PCIe 3.0 lanes), support for Thunderbolt 4 with 40Gbps transfer speeds, and Intel's Iris Xe Graphics with 32 execution units (EUs). There's also support for DDR4-3200 memory, H20 Intel Optane storage, Intel's Killer Wi-Fi 6E cards.

The lineup is headlined by the Intel Core i9-11980HK processor, which is unlocked for overclocking, and it features eight cores and 16 threads. It's also capable of boosting up to 5.0GHz not just on a single core, but on two of them. Its maximum all-core turbo is 4.5GHz. There's also a variant without overclocking support and with slightly lower clock speeds. You can also see that even the lower end of the lineup features at least six cores and 12 threads, and the integrated graphics run at similar speeds across the board.

Intel is touting the performance of its chips across the board, with the Core i9-11980HK beating AMD's Ryzen 9 5900HX across the board in a number of games, while also being a major improvement over the previous generation of Intel processors. Intel also pits its Core i5-11400H against AMD's Ryzen 9 5900HS showcasing comparable performance between its mid-range processor and the red team's higher-end product. 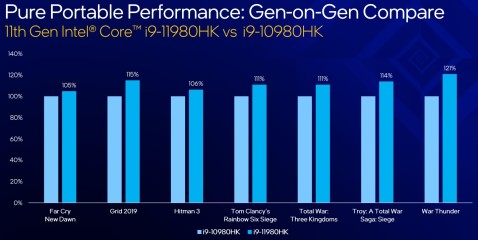 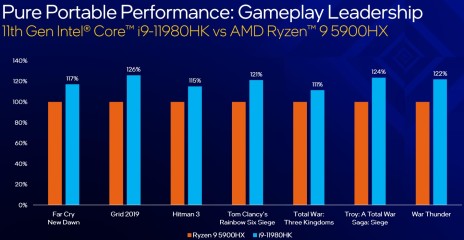 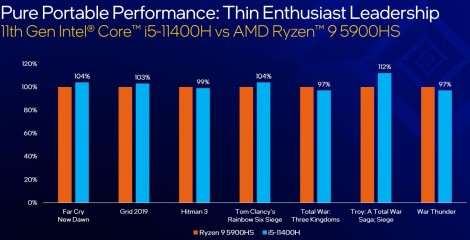 Over on the creative side, Intel promises up to a 22% improvement over the previous generation. Comparing the Intel Core i9-11980HK to the Ryzen 9 5900HX, Intel also claims up to 24% higher performance, specifically in image editing in Photoshop Elements. It also claims 18% better video editing performance in Adobe After Effects and a 19% improvement in Microsoft Office productivity workflow.

In addition to the mainstream Core processors, Intel also announced new vPro models, as well as the new Xeon W-11000 workstation processors aimed at professionals. These share a lot of the same technologies but support Intel's vPro platform, SIPP, and TXT.

Many laptops are already being announced today with these new processors, with Intel claiming there are over 80 designs with its 11th-generation H-series chips.