Back in April, an alleged Intel roadmap had leaked, according to which the company appeared to be planning the upcoming 12th gen Alder Lake-S desktop launch for mid-Q3 or Q4 of this year. This may still be true, but a new roadmap has leaked today that's dated back to January, containing information on Alder Lake vPro parts. According to it, Intel's Alder Lake platforms - both the desktop-based Alder Lake-S as well as the mobile Alder Lake-P -, might not be arriving before Q1 of 2022. 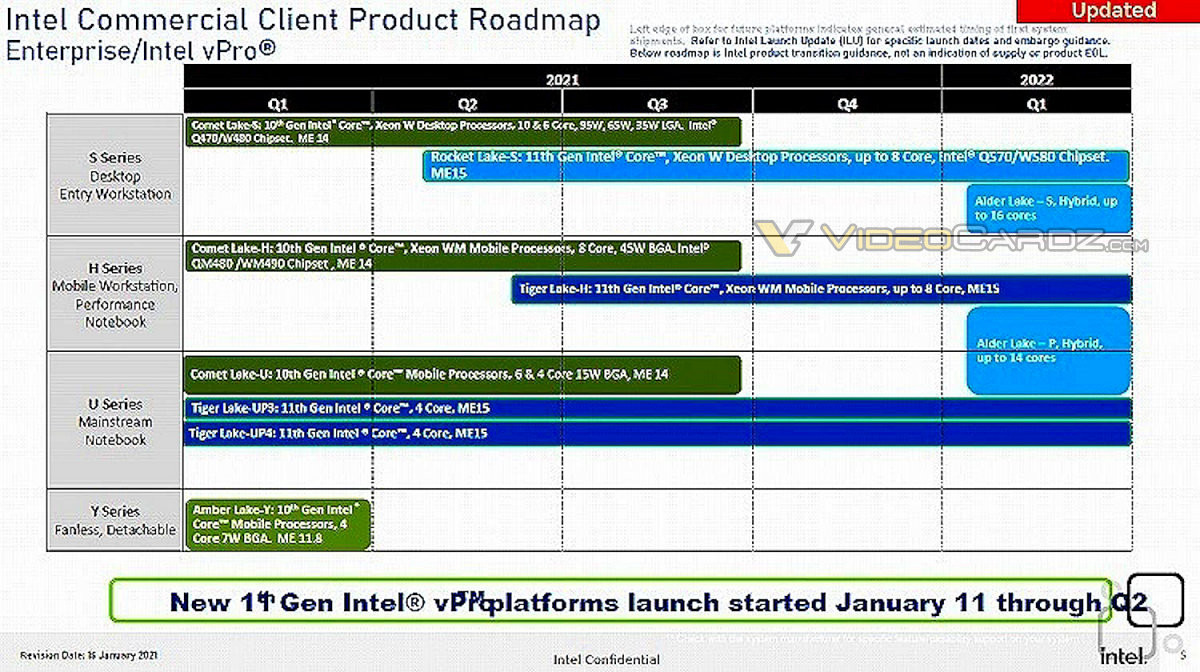 Unfortunately, we have no way of knowing which one of the leaked roadmaps is the latest. In general, companies delay product launches and rarely expedite them. In this time of global chip shortage, the former seems more likely. Then again, Intel has been struggling against AMD's Ryzen offerings in the desktop segment and would want to get its processors out as early as possible.

There are hints that Alder Lake - at least on desktops - is probably not too far away, considering we already have compatible DDR5 memory out, as well as spares of socket LGA 1700 selling online. And vPro parts do normally tend to be launched close to the general SKUs.

Moving on from there, we are also greeted today with purported new information regarding Alder Lake mobile platform. There is the mention of Alder Lake-M, as well as all-new H55 parts that now raise the TDP level of the chips beyond 45W. We were already aware of Alder Lake going up to 14 cores and 20 threads (14C/20T), comprising six large Golden Cove cores and eight Gracemont cores for a (6+8) layout. However, the apparent new H55 parts will rival that of desktop SKUs with a 16C/24T configuration.

The integrated graphics in these chips appear to be cut down significantly compared to the 14C/20T Alder Lake-P parts. It is alleged that there will only be 32 graphics Executions Units (EUs) in H55 SKUs, compared to 96 EUs on Alder Lake-P.

Lastly, there is a slide relating to the Windows support for Alder Lake platforms, according to which the 12th gen Intel processors are supported by Windows 10 version 20H2 and newer.