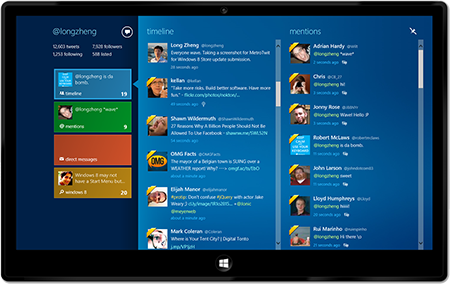 While Twitter has yet to release a Windows 8 app on its own, there are a few third party solutions available for Windows 8 Twitter users. One of them is MetroTwit, which released a version for the pre-launch builds of Windows 8 several months ago. Now, MetroTwit has been updated with new features as well as a Pro version that can be unlocked for $4.99.

We got a chance to ask some questions to one of the co-creators of MetroTwit, Long Zheng, about the app, his feelings on Windows 8 and more.

First, what can you tell us about your programming background in general?

I actually don't have a computer science background. Everything I know about design and programming has been self-taught over the last decade with various projects I've undertaken, which includes MetroTwit. I'm currently proficient in WinRT & WPF XAML and somewhat familiar with C# .NET, although my friend Rafael Rivera would strongly dispute this.

How did the idea for MetroTwit come about?

It was a blog post and a cruddy photoshop mockup, really. I've been a devoted Twitter user for a while then and the choice of Twitter clients on Windows wasn't very diverse. The apps were largely Adobe AIR based and didn't have much consideration for Windows. I thought I could put together, or at least design, something more elegant. Not long after I made the call for help on my blog, I was working with and have been two Australian developers to bring some of those ideas to life.

When the Metro-inspired interface of Windows 8 was first revealed, it was all too familiar since MetroTwit draws a lot of inspiration from the Metro design style from Windows Phone 7. At first, we didn't quite know what sort of Twitter experience we would want to offer as a Windows 8 app but we knew we had to make one. The Windows Store couldn't have soon enough. Since we offer a "Plus" upgrade to our Windows desktop application that requires payment, we know all too well the pains of supporting and marketing a paid Windows application.

Even having something as simple as the payment processing handled (at an industry standard rate) by the Windows Store is an overwhelming win for Windows app developers.

How hard was it to develop MetroTwit with the Metro UI in mind?

Ironically, developing a "Metro UI" app for us was quite challenging even though we are quite familiar with the Metro design style. Our desktop application is undeniably a mouse-centric experience and "porting" the UI would not have worked. Not only did we have to make our experience more touch-friendly, we also had to conform to the Windows 8 app "standards" like the app bar and charms. This was a considerable shift from our previous UI which we're still not entirely happy with and continuously tweaking.

When you factor in a range of other differences like device form factor, screen size, usage environment; essentially we redeveloped MetroTwit from the ground up while keeping just a handful of conventions from our desktop app

Overall, what makes MetroTwit stand out from other Twitter apps?

We are targeting MetroTwit to the heavy Twitter user who wants to see much more content from Twitter on the screen at the same time, as well as having the best-in-class Snap experience for multi-tasking socialites. Even though our app is admittedly not yet feature-complete and somewhat rough around the edges, we think we have the most comprehensive set of features for a compelling Twitter experience on Windows 8.

I've touched on some tips for designing for Windows 8 touch screens in a blog post previously but my strongest advise would be to actively use and test your app in touch-mode, especially on a slate form-factor device. Holding the "app" in your hands is a very different experience than using the mouse and keyboard or even the touch simulator that comes with Visual Studio. There were many cases of usability issues that I discovered after playing with it on a touch device.

What's the reaction been like to the Windows 8 version of MetroTwit so far from the preview versions?

The app has received an overwhelming positive response from both the previews and the latest general release. We're very fortunate enough to have a lot of users provide actively provide invaluable feedback that's helped us fix a lot of issues and refine features.

You just launched the paid version of the MetroTwit app for Windows 8. What new features have you added to it?

Currently our "Pro" in-app upgrade removes the advertising and enables multiple accounts functionality. We anticipate adding in other professional-oriented features for the Pro upgrade in the future. To thank our loyal and early supporters who bought the MetroTwit Plus upgrade for the desktop version, we've also extended the Plus upgrade to the Windows 8 app for free.

What plans do you have about adding to MetroTwit in future updates?

Like our desktop app which we're still actively developing, we've got many features on our "to-do" list for the Windows 8 app as well. Our current focus is to continue fixing bugs and release updates to optimize for performance and reliability.

I think there is some merit to their perspective, but it doesn't necessarily mean its at a detriment to Windows developers. At the cost of some control and flexibility, Windows 8 and the Windows Store offers many new opportunities that should liven and strengthen the Windows app ecosystem. As a Windows 8 app development company, we're very confident in the ecosystem and are actively looking for new in-house and contractual app projects.

How do you feel about Twitter restricting third party apps that use their API?

The politics aside, Twitter's ongoing restrictions of their API has already and will continue to have an impact on the functionality and profitability of third-party Twitter client applications like MetroTwit. We're trying our best to ensure our app adheres to updated rules and restrictions but we strongly believe the API changes will have a detrimental impact on user experience.

We're very excited by the opportunities Windows 8 present to app developers and end-users. The team look forward to shipping more Windows 8 apps in the future.

We would like to thank Long for answering our questions!